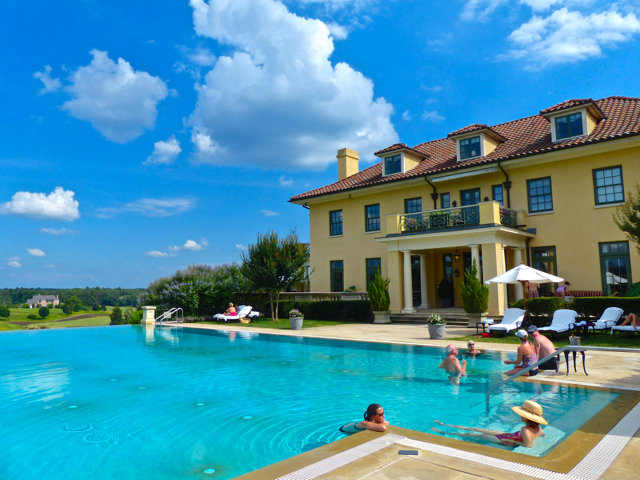 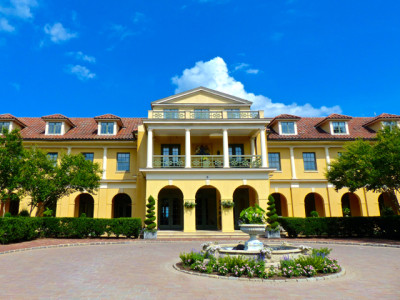 Located 15 minutes outside of downtown Charlottesville, Virginia, Keswick Hall is known as one of the most esteemed resorts in the U.S. Recently named one of Travel + Leisure’s 500 “World’s Best Hotels,” the historic property is a peaceful oasis set on a picturesque, 600-acre private estate at the foot of the Blue Ridge mountains.

I recently spent 2 nights at Keswick Hall during a “girlfriend getaway” to Charlottesville with my mom. Here are our photos and reflections from our stay. 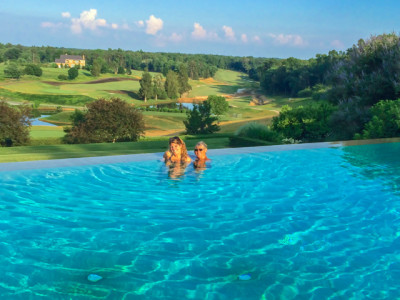 The main building at Keswick Hall was built as a private home in 1912 by Mr. and Mrs. Robert B. Crawford. After Robert’s death in 1919, the home, which was nicknamed “Villa Crawford,” remained a private residence for the next 29 years until it was converted to a private country club in 1948. In the 1970s, the Keswick Country Club began to decline and eventually closed.

Villa Crawford was boarded up and was relatively forgotten until 1990, when Sir Bernard Ashley (the widower of designer Laura Ashley) saw the potential in the ailing property. Under his watch, Villa Crawford was restored to its original glory and expanded upon to increase the number of rooms and develop recreational facilities worthy of a world-class resort.

TIP: To get a personalized take with much more about Keswick Hall’s history, guests can schedule a complementary tour with the hotel’s fantastic historian, Patricia Castelli. I did, and would highly recommend it. 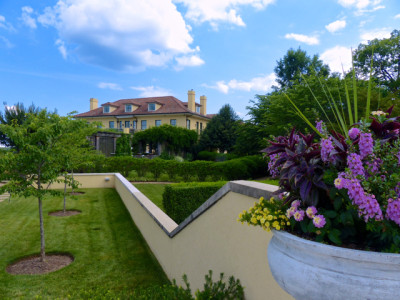 View of Villa Crawford from afar 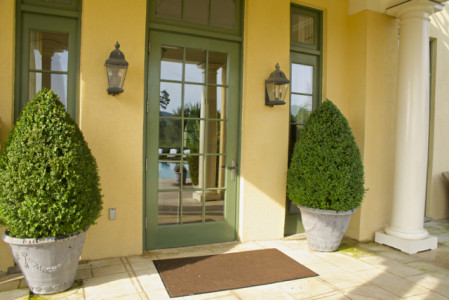 The entrance to Villa Crawford — Photo by Jo Ann Ricchiuti 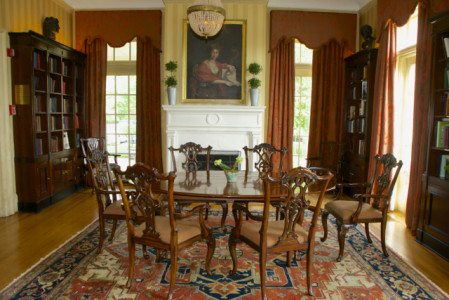 The hotel’s exterior design evokes the feeling of a Tuscan villa, with goldenrod-colored stucco and a terra cotta roof. The hotel is situated atop a crest, affording panoramic vistas of the highly anticipated Pete Dye golf course (opening later this summer).

Besides the golf course, the grounds are also home to the aromatic Chef’s Garden, tennis courts, fitness center, spa and 3 pools. My favorite pool was the gorgeous horizon pool, which looked out over the expansive emerald green golf course.

A visit to the horizon pool is designed to be serene experience— fluffy white towels, fruit-infused waters and sunscreen are all on hand for the guest’s convenience. Also provided are a smattering of padded lounge chairs which surround the pool and ensure a restful experience… provided you’re lucky enough to snag one. There aren’t many, so come early and claim your seat and enjoy spending some time relaxing in the pool’s heated salt water, with a frosty hand-delivered cocktail in hand. 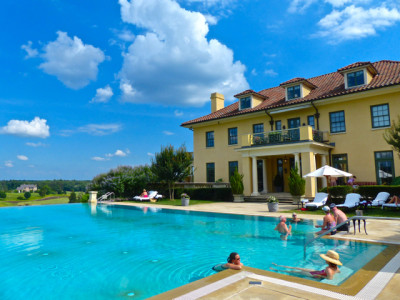 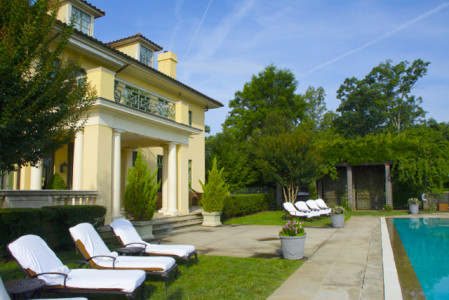 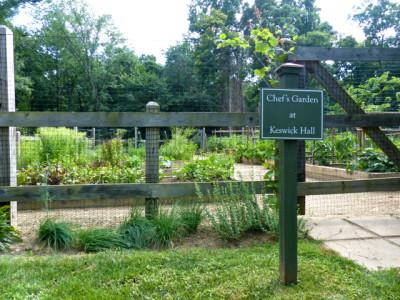 The Chef’s Garden at Keswick Hall 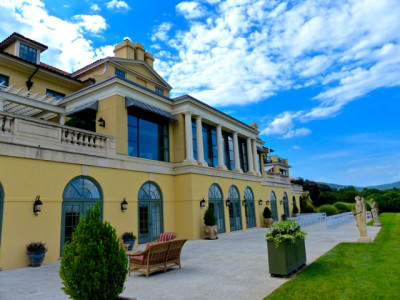 The back side of Keswick Hall overlooking the golf course. Fossett’s restaurant is on the 2nd level with the full sized windows.

The views looking over the golf course through floor to ceiling windows were spectacular, as was the service and the food. Some things like food are better shown than talked about… Here are the highlight from our meal! 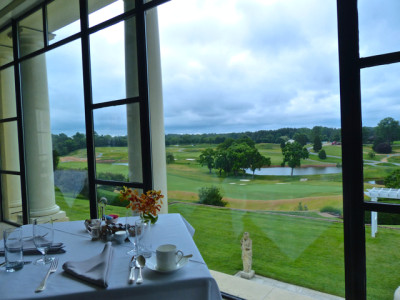 The view from our table at Fossett’s 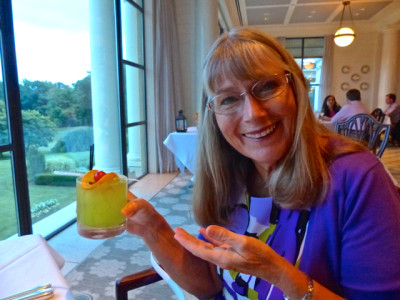 Mom enjoying a tropical cocktail. I opted for a crisp glass of rose! 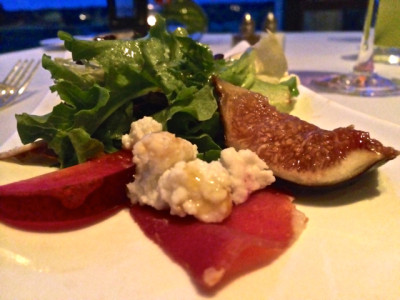 A fig and salted ham salad with fresh ricotta and honey 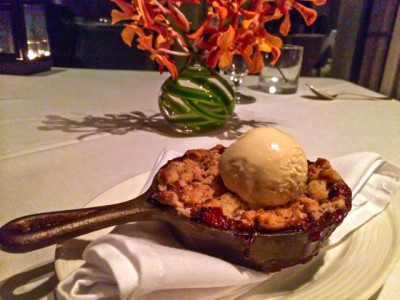 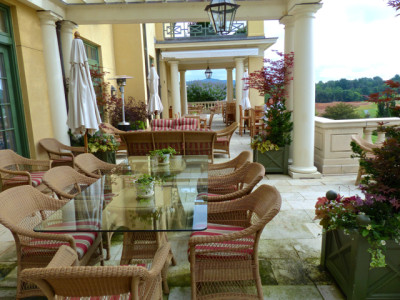 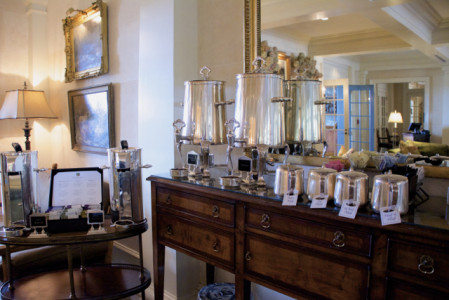 In the morning, Fossett’s also provides some of the best coffee I’ve ever had. Seriously– the specially roasted “Keswick Blend” was delicious. (Photo by Jo Ann Ricchiuti)

The interior design at Keswick Hall feels like you’re a guest in someone’s expensive country home. However, with an upscale cottage chic style, it’s surprisingly comfortable and not stuffy at all.

Throughout most of the property, rooms were very bright and open with lots of natural light infusing the common areas. The color palette was a lovely mix of creams, blues, tans and whites. 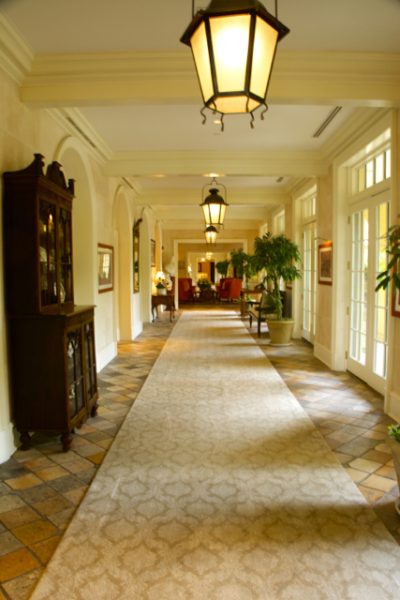 The main hallway off of reception — Photo by Jo Ann Ricchiuti 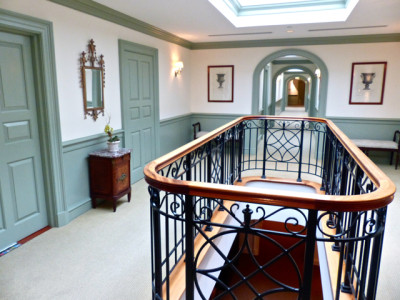 Our room was on the 3rd floor, and was immensely comfortable. Our king bed was soft without being too soft, and I had the best sleep in ages both nights we were there. (Note: The rooms only have king beds, but a rollaway can be provided, if needed.) 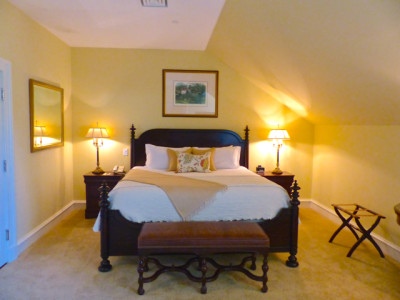 The bathroom was spacious— about 1/3 the size of the room. Sleek lines and crisp whites dominate, with shiny chrome accents. Molton Brown toiletries scented with honeysuckle, lily and other exotic scents and huge, soft white turkish towels were such a luxury. 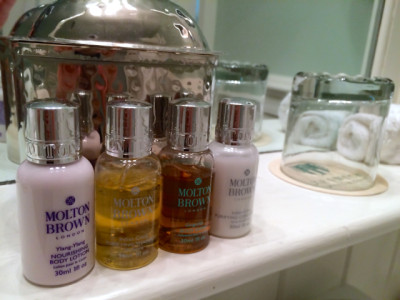 One of our room’s nieces features was a little alcove that housed a writing table and our room’s only window that looked out over the golf course. If I would have any criticism for the room, is that it was a bit too dark. While having only one window did help ensure a restful sleep, our room would have benefitted from some recessed ceiling lights. 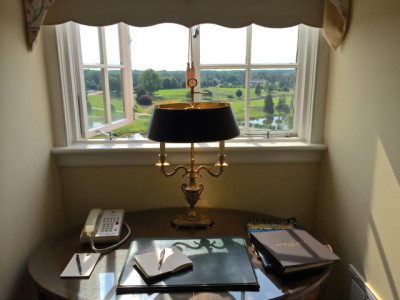 Our writing table with a view of the golf course

After spending two nights at Keswick Hall, I can see why the resort has received such high accolades. The quality of service we received from the staff, the impeccably maintained grounds, the dining, the views and the overall attention to detail were among the best I’ve seen in any property I’ve visited.

Keswick Hall’s vibe is incredibly comfortable and welcoming to everyone. I found that we received highly personalized service (“Good morning, Ms. Ricchiuti!“) but the resort still felt big enough that we could have privacy to move around without feeling hovered over.

It’s not cheap— summer weekend rooms run from $389-$800/ night, but look out for reduced rates in the cooler months. If you can afford it, Keswick Hall is an incredible, relaxing destination resort. 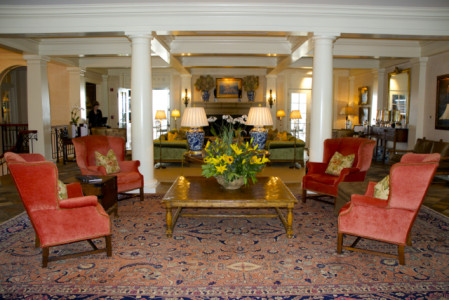 **DISCLAIMER: My accommodations and meals during my stay were provided Keswick Hall. As always, all opinions are my own.**