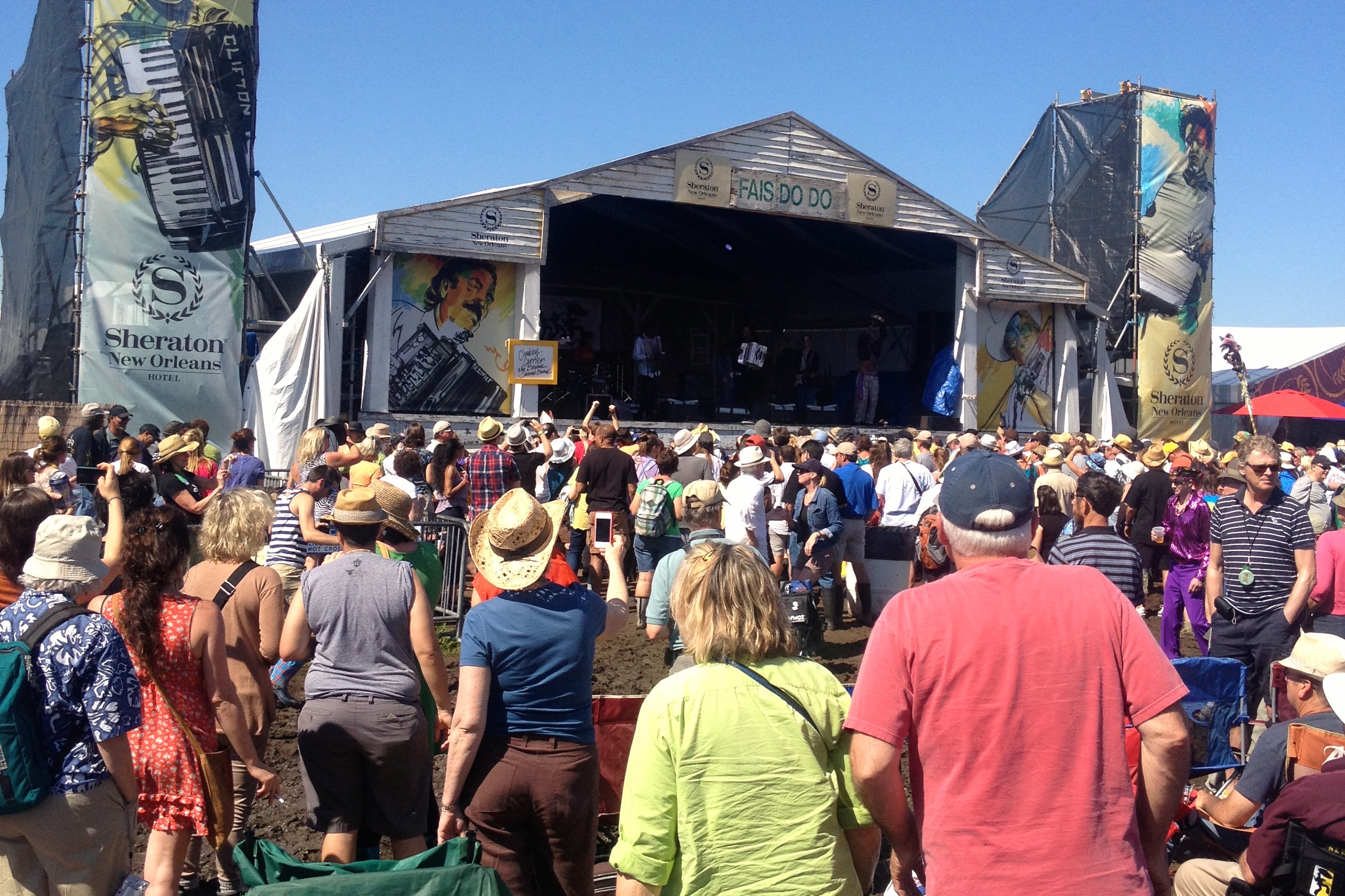 08 May A First Timer’s Guide to Jazz Fest 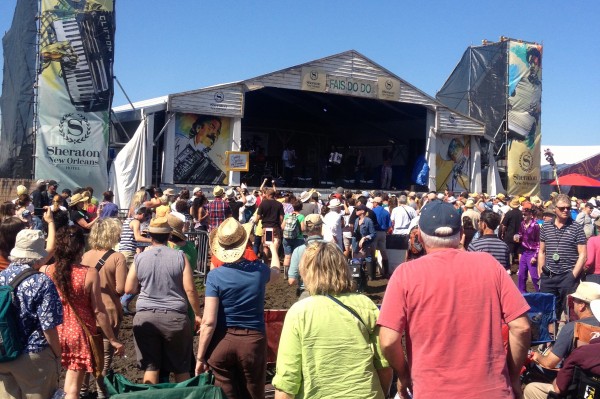 I’ve just returned home after a food-and-music-fueled weekend away in New Orleans. This was not my first visit to the Big Easy, but this trip marked my first time at one of this city’s biggest draws: the New Orleans Jazz & Heritage Festival.

Jazz Fest, as it’s colloquially called, has been around for over 40 years. Since New Orleans is considered the birthplace of jazz, it’s only fitting that the ultimate celebration of jazz in its many forms –from blues, to gospel to rock to pop-jazz fusion– is held here at the Fair Grounds Race Track. Today, the musical acts are spread over 12 tents and stages around the track, with booths featuring Louisiana’s diverse food and rich culture scattered within the infield.

I had an amazing time revisiting New Orleans, and after getting introduced to Jazz Fest I can see why people make a special effort to attend year after year.

Here are some of my reflections, tips and pictures from the event.

After waiting for the bus only to find it completely packed, my friend Liz and I opted to walk from the French Quarter, nearly 2.5 miles each way. The walk was really pleasant, passing charming houses, blooming flowers and churches. There were lots of people who decided to ride bikes to the event, so there was a fair amount of car, bike and pedestrian traffic the whole way.

Another perk? It just so happened to be Louisiana’s Lemonade Day, so we passed by booth after booth of adorable kids selling Lemonade for various causes, such as the Boston Relief Fund, or their community churches. 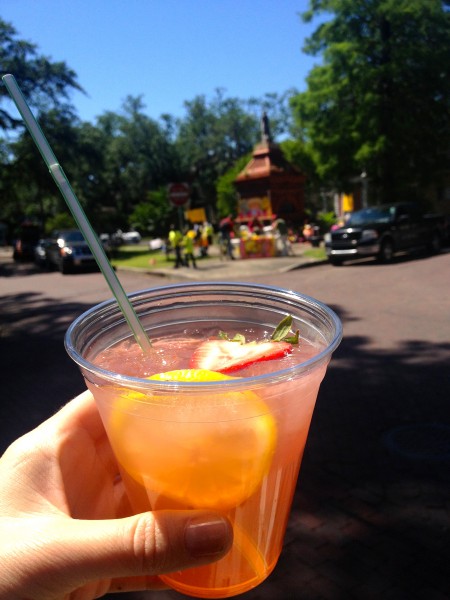 I found the food to be incredibly well priced, delicious and diverse. In preparing for the trip, I heard that the food was spectacular, and reason enough to go to Jazz Fest, and I’d definitely agree. Despite the crushing crowds, the food lines moved fast.

Throughout the day, I seemed to go on a crawfish bender: Crawfish Bread, Crawfish Etoufee and Crawfish Beignets were all snacks that Liz and I shared. And, of course, I had my share of N’Awlins Rum Punch Daquiris. (A Rum Runner-esque concoction made specifically for the festival with Bacardi 151 Rum and fruit juices).

But, there was so much food, so little time and I missed out on a few classics like Crawfish Monica, Mango Ice and the Cochon de Lait Po-Boy. Gives me something to look forward to next time! 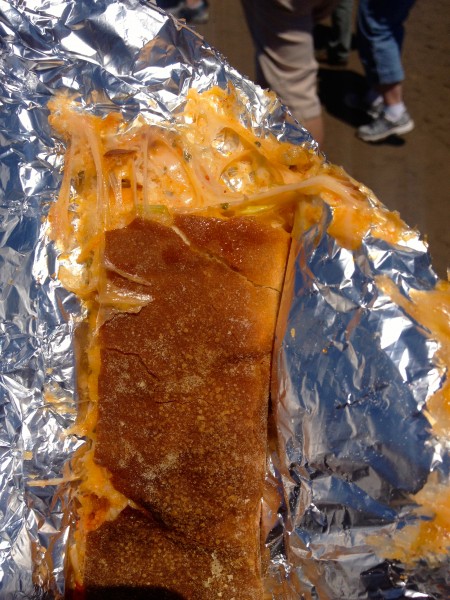 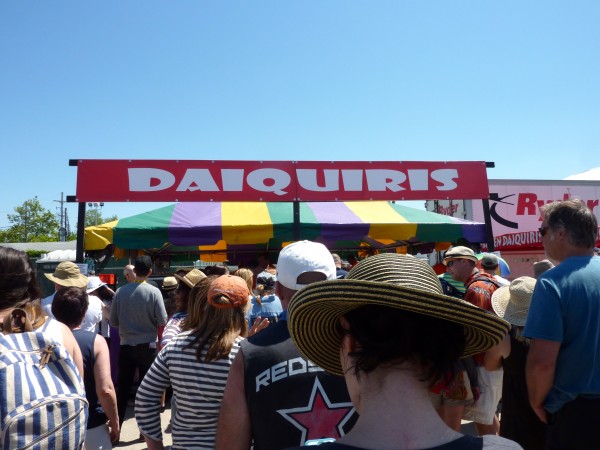 We arrived with plans to see the bigger acts of the day, including Fleetwood Mac and Frank Ocean. However, as the day progressed I learned that while the big acts were of course worth going to, it’s the smaller acts that were really spectacular. Those are the musicians that may not tour, and are really enthusiastic to have such a renowned platform to showcase their music to a new audience. (Plus these shows are significantly less crowded, which is an added bonus.)

Throughout the day, we got to get up close to hear an extended set by the Little Willies– with Norah Jones as a lead singer/ pianist, got to rock out with Cowboy Mouth and was exposed to a new favorite with NOLA band, the Revivalists.

And all along the way we saw a Mariachi band, a drum group and countless smaller Cajun and Folk acts (including a fair amount of washboards!) and more.

However, our best decision of the day was stopping into the Gospel Tent on our way out to hear a church choir joyfully singing upbeat praises. I’m not religious, but watching a 75 year old lady dance and sing her heart out backed by a group of 8 to 80 year olds was enough to melt my agnostic heart, make me clap, dance and join in. 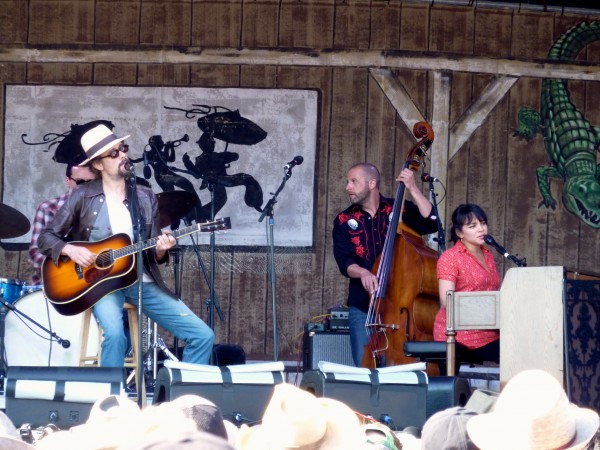 The vibe was upbeat and cheery from start to finish. Everyone was loving life and as friendly as can be to each other. I didn’t see one fight, shove, eye roll or even dirty look and honestly it was as utopic as a big event possibly could be.

The hardest part was navigating the sometimes-crushing crowds, particularly between sets. 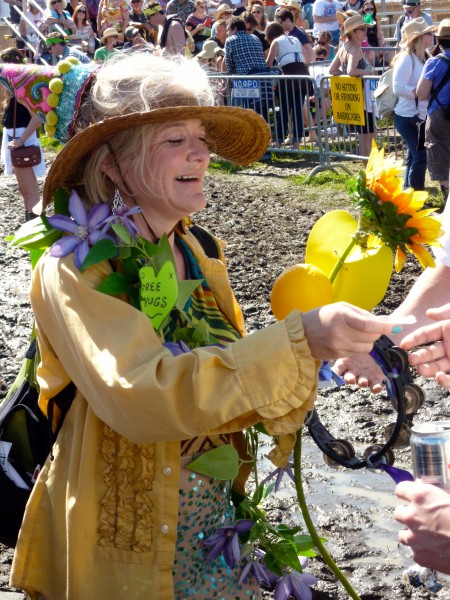 The “Free Hug” Lady was the most popular person at the festival, I think!

Nicest surprise: That the tents had seating! The outdoor stages were all standing room only (unless you brought in a chair, which we did not) but the 3 main tents (Gospel, Jazz and Blues) were a great place to get some relief from the sun and the standing, while listening to live music.

I wish I would have: brought rain boots. It was disgustingly muddy (and since we were on a horse track, the mud wasn’t all dirt…) Luckily I had sporty sandals and was able to navigate the sludge. But some people jumped right in and went barefoot. Gross! 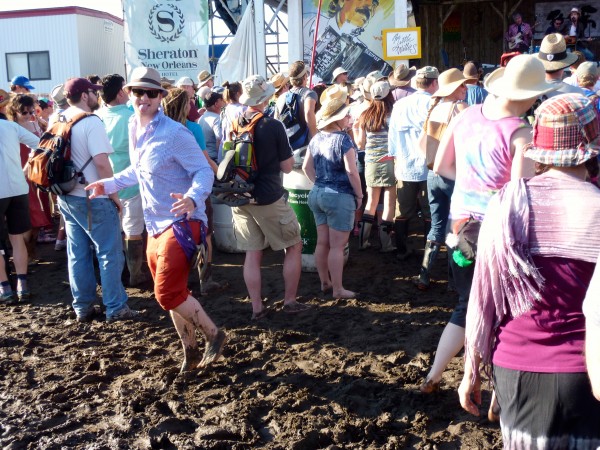 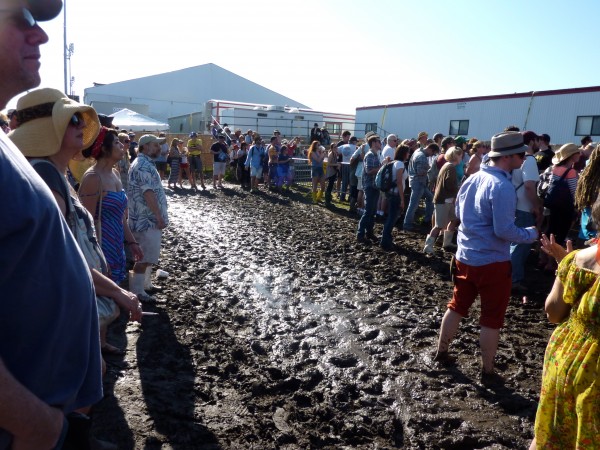 Most prevalent fashion trend: cut off jean shorts. (And the lack of shoes.)

Port-a-Potty Report: Not as bad as it could have been, but by the end of the night there was a TP shortage. Lesson learned: Look before you go.

If I do it again: I’d make my trip a day longer and head into the festival on Friday and Sunday, taking Saturday off to rest and enjoy the rest of New Orleans. 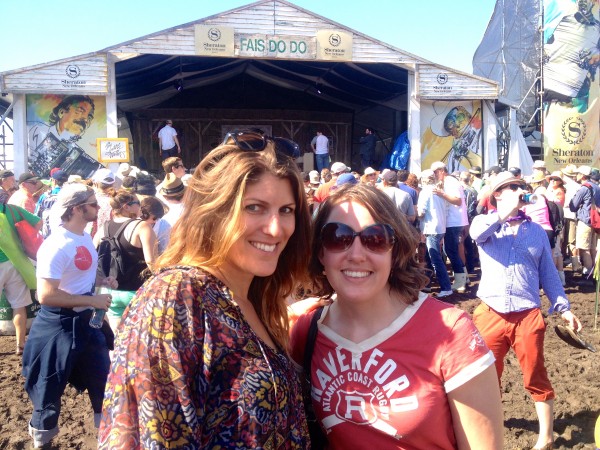