Packed Suitcase | Mixing it Up at a Secret Speakeasy
2766
post-template-default,single,single-post,postid-2766,single-format-standard,ajax_fade,page_not_loaded,,qode_grid_1300,hide_top_bar_on_mobile_header,qode-content-sidebar-responsive,qode-theme-ver-13.2,qode-theme-bridge,wpb-js-composer js-comp-ver-5.4.5,vc_responsive

Mixing it Up at a Secret Speakeasy 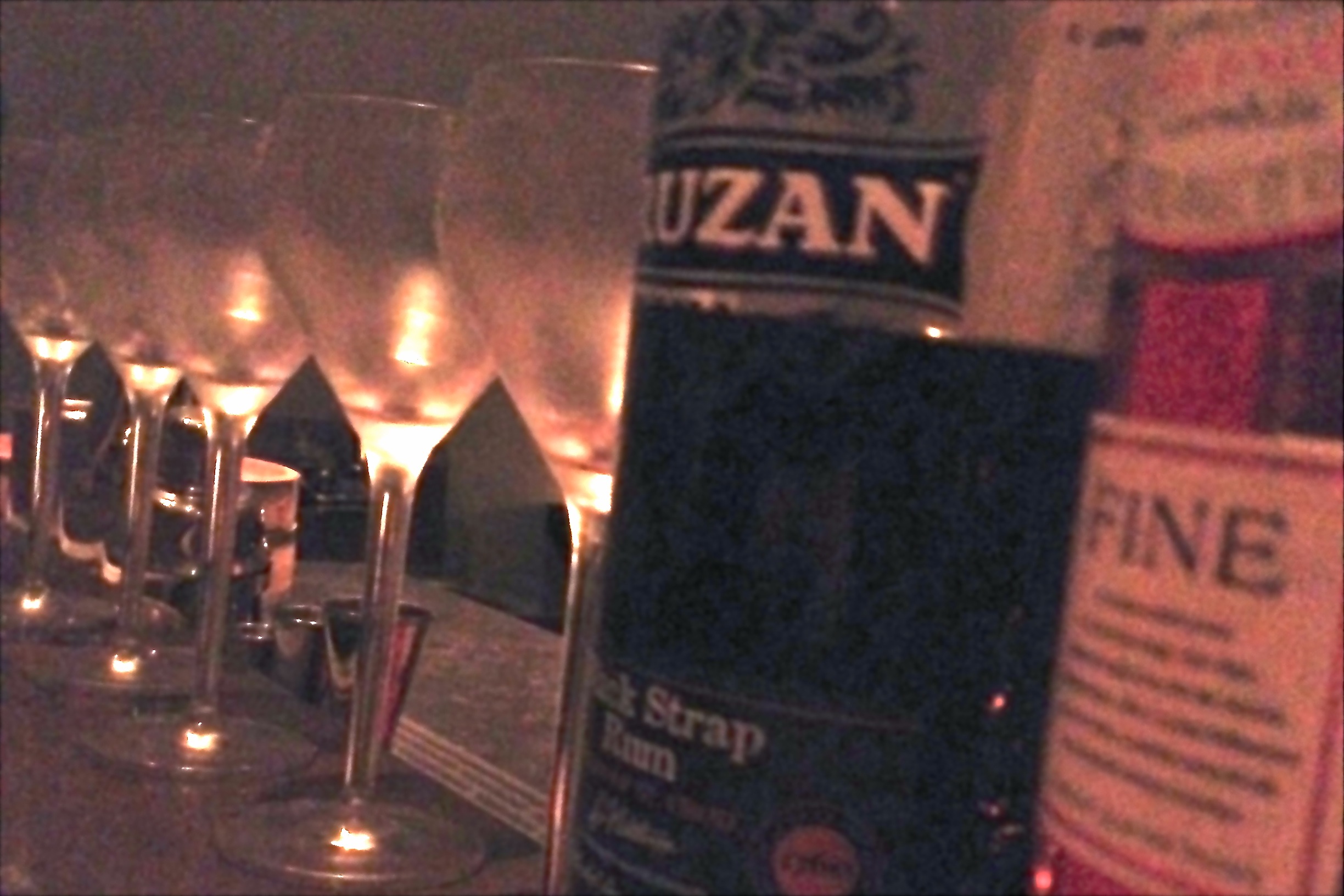 24 Sep Mixing it Up at a Secret Speakeasy

Posted at 06:00h in Experience, Mid-Atlantic by Christina Ricchiuti-Dubin 2 Comments 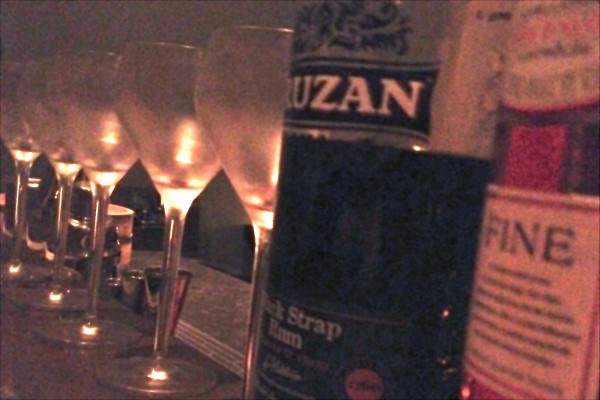 As a kid, I was fascinated with the concept hidden passageways and the thought that there could be a whole world of secret doings behind an otherwise ordinary facade. I’ve never found a hidden passageway of my own… until one recent night in DC I stepped through a secret doorway into a mixology-lover’s paradise: The Columbia Room.

The Columbia Room is one of the best cocktail bars in the nation and is the brainchild of master mixologist Derek Brown. They offer a “drink tasting menu, including an opening drink, a seasonal drink paired with an amuse bouche and a third drink of your choice customized by our bartenders.” Yep, I simply had to go… and sooner rather than later.

On this very special evening, I went with two of DC’s finest Travel Ladies: Kelly (Flip Flop Caravan) and Jennifer (City and Sand). After making our reservation weeks in advance, we arrived promptly, thirsty and ready for a blog-worthy experience.

The only trouble is that we had absolutely no idea where to go. 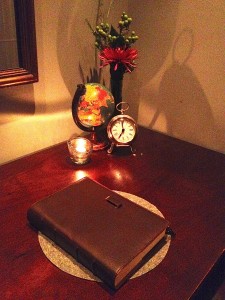 The entrance to the Columbia Room

The Columbia Room really is just a room, situated secretly within another popular DC spot, The Passenger. There’s no signage, no advertising to let you know that it’s there. The bartenders completely ignored us as we walked in to the empty, just-opened bar, which meant we had to start searching for a sign, door, hand gesture or anything that would indicate that we’d arrived.

Finally, in the midst of the very uncomfortable feeling of being lost—was it was just a cruel hoax all along?— we find a non-descrip black door. Taking a chance, we open it. Success!

We find ourselves in a homey little entryway. There’s an antique wooden desk, a vignette of collectibles and a leather bound journal right smack in the center of it. Oh, and there’s also Matt, a well-dressed twenty-something patiently just standing there, who we later learn is our personal bartender for the night.

Yes, we are most definitely in the right place.

After a quick greeting, Matt opens the journal to find our hand-written reservation. It’s there and we’re immediately ushered into the small room.

Instantly, I’m transported into another era. The air is effervescent, with the subtle aroma of ginger and lime. It actually smells fizzy! The only light is from candles, and despite the formality of everything the mood is warm and cozy.

There’s a stone bar with seats for 10 people. No more, no less. (Hence the strict reservation policy.) Behind the bar, instead of rows of Absolut, Jack and Jose, the wall is lined with beautiful bottles of all sizes— spirits whose names I am unfamiliar with. 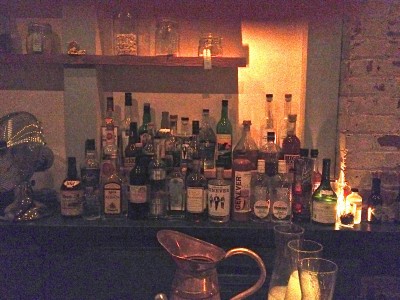 We sit, and are given a cold towel (to “refresh ourselves”) which was gently scented with orange and clove. Fuzzy, grey felt coasters are placed down, along with glasses of cold cucumber water. As my friends and I look around with a little bit of awe, our first cocktail arrives. 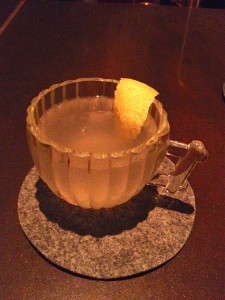 The Limmer’s Punch arrives in a clear glass teacup. During a brief preamble by Matt, we learn that it originated in London in the early 1800s (from the aptly named Limmer’s Hotel) and is a precursor to the Tom Collins.

Sidenote: Evidently a bartender by the name of John Collins worked at the Limmer’s Hotel and made a variation of his own. That is the Tom Collins we know today, but the drink took on the first name “Tom” because it’s made with Old Tom Gin.

Anyway, the Limmer’s Punch is made with Hayman’s Old Tom gin, Maraschino liquor and lemon juice. It tastes sweet, cool, tart and has nice flavor as the giant swirl of lemon rind falls in and further infuses the drink.

As we sip, savor and chat over our cocktail, Matt and a couple other bartenders are working silently— gently cracking ice (they make it themselves and carve it daily with a chainsaw), tidying up and beginning preparations on the next cocktail. They’re like little hipster worker bees working in silent perfection. 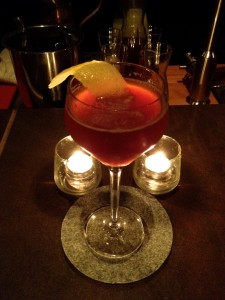 Matt lines up each of the bottles on the bar so we can take a closer look. As he pours, he explains our next cocktail, the Summer’s End. With Cruzan Black Strap Rum, St. Elizabeth Allspice Dram, Daron Calvados, lemon juice and simple syrup, it’s like fall in a glass.

As he prepares the cocktail, I can’t help but be fascinated with how he adds the lemon rind at the end. He begins an elaborate ritual of gently twisting and squeezing the rind over the entire cocktail— with the focus of a shaman warding away evil spirits or a witch stirring her bubbling cauldron —before swiping it along the entire rim and delicately draping over.

A “lemon spritz” he calls it. Sure, we’ll go with that.

Either way, it tastes molasses-y and rich, but the tartness of the lemon adds a complex lightness. (I guess the ritual was worth it!)

Our drink tasting menu included a few snacks- and while they weren’t enough to constitute a meal, they definitely were welcome in the midst of imbibing libations.

Then, a small plate of pan roasted pork tenderloin, with a balsamic-dijon jus and an apple cabbage slaw. 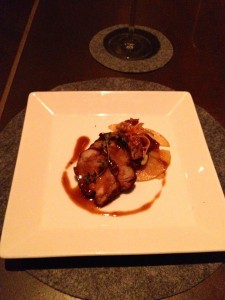 We also ordered a cheese plate (featuring a tangy blue, a creamy “stinky” and a nutty cow’s milk cheese with a slew of crostini and cranberry shallot jam and some kind of organic honey) that was one of the best I’ve ever had. And at $11, it was also a steal! 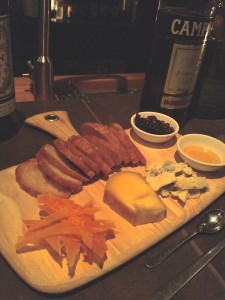 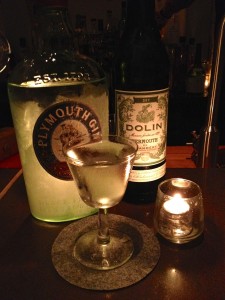 Moving on to the final part of the evening, was our specially customized cocktail. For this, we each worked individually with the bartender to find our perfect final drink.

I was super-excited about this and wanted to leave it open-ended to maximize creativity. I had just two requests.

1.) I didn’t want lemon to be the star of the cocktail (since the first 2 had their fair share of lemon).

2.) I wanted it to relate to travel in some way.

What I ended up with was… wait for it… a classic dry martini. Huh?

While it didn’t have a thing to do with travel, and wasn’t the most imaginative cocktail I’ve ever had (with only two ingredients – Plymouth Dry Gin and Dolin Vermouth), it still was pretty spectacular.

Not only that… GQ says that Derek Brown’s Columbia Room has the best martini in America, so who am I to argue?

The Columbia Room is open Tuesday through Saturday evenings. The drink tasting menus is $67, including tips and tax.