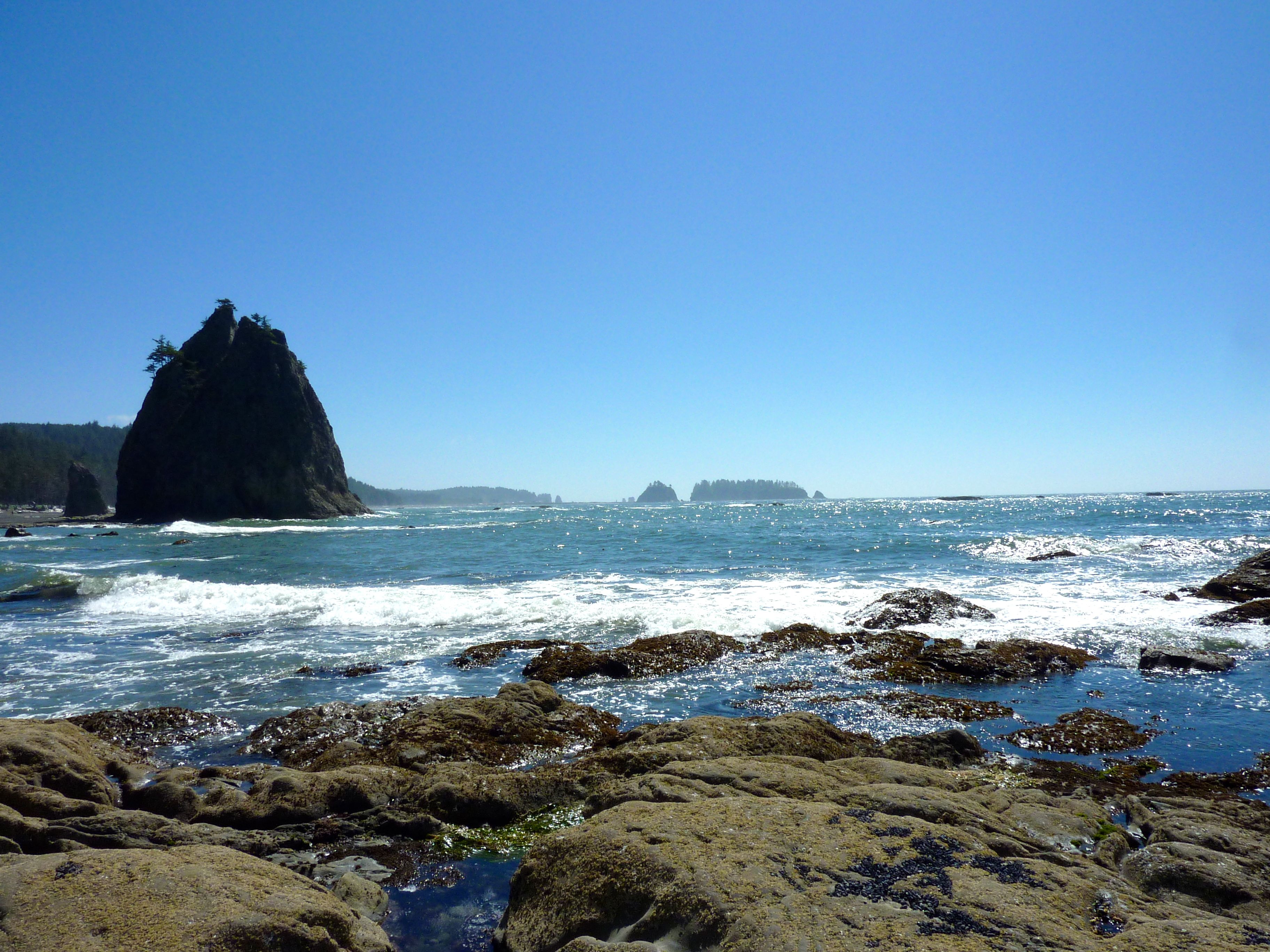 Posted at 07:00h in Long Trip by Christina Ricchiuti-Dubin 0 Comments

Just shy of 1,500 square miles, Olympic National Park is the 13th largest National Park in the US. Olympic’s unique because it contains 3 distinct eco-systems within its borders. At lower elevations, it’s home to temperate rain forests with moss-drapped trees and ferns aplenty. Then, there’s the 73 miles of coastline with rugged sea stacks, rocky beaches and tide pools (with lots of star fish and sea anemones!) Finally, there’s the alpine mountains, with jagged, snow-packed peaks and meadows of wildflowers.

On day 2 of our Olympic trip, we traversed to the far reaches of the park to explore the craggly and beautiful coastline and the Hoh Rainforest.

Our first stop was Rialto Beach, where I was utterly gob-smacked by the breathtaking beach. We spent a few good hours meandering to the Hole in the Wall sea stack, exploring the tide pools, spotting visitor-made rock cairns and being thisclose to being caught by the rising tide. (Whoops!)

Here is a video with some of my impressions of Rialto Beach, and a few of my favorite pictures: 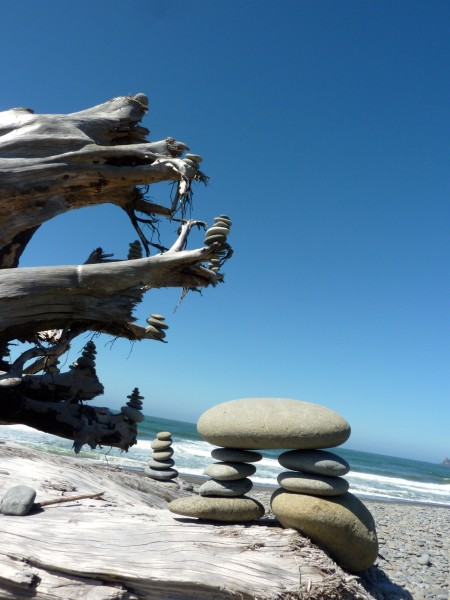 These stone cairns were found all around Rialto Beach. Often in natural settings, cairns are used as trail markers. Here, they’re just an unobtrusive and reflective symbol to say “I was here” from travelers who have passed through. 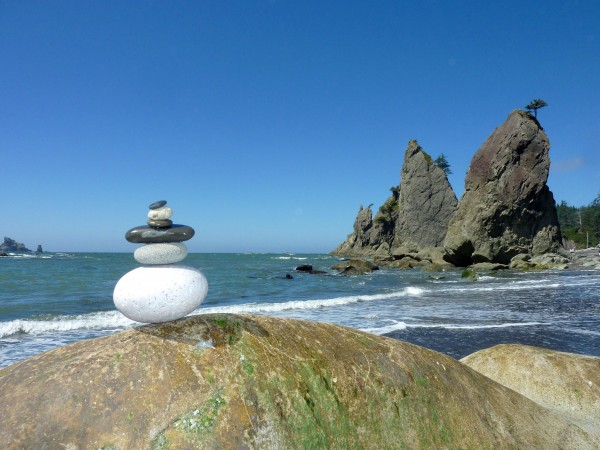 I had to take a moment and make a precariously balanced cairn of my own to add to the serene landscape. 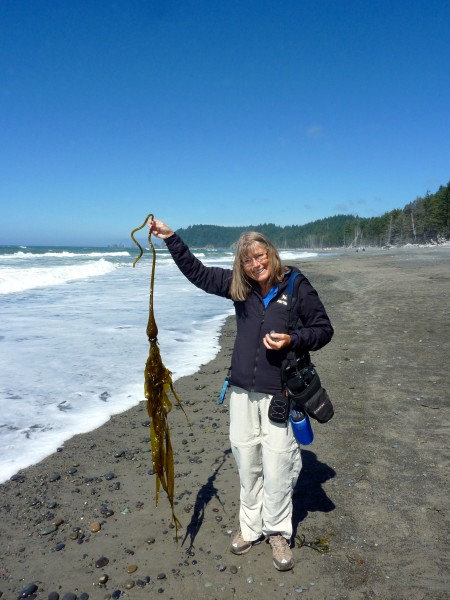 As we walked to the Hole in the Wall sea stack, we found some huge kelp littering the beach. It’s almost as big as Mom! 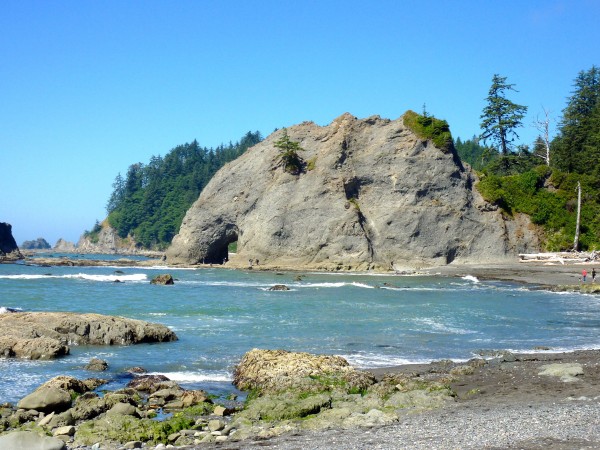 A view of the Hole in the Wall: a sea carved arch in the stone. 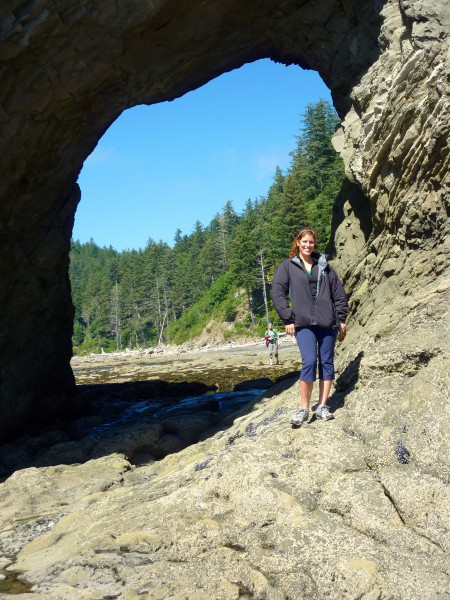 After a 2 mile hike on the beach, I made it to the Hole in the Wall. But the tide was quickly approaching… 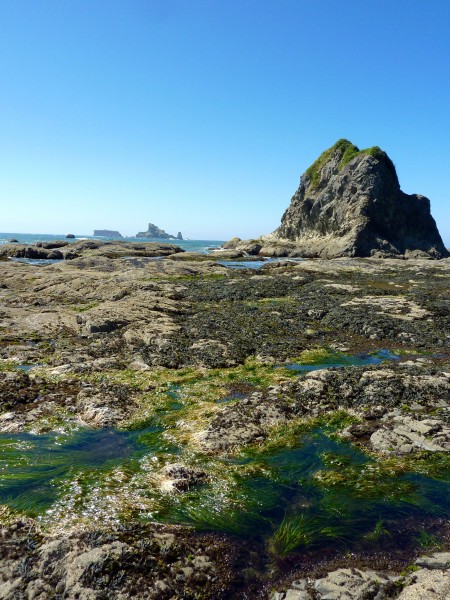 When it’s low tide, you can find some awesome tidal pools just out past the Hole in the Wall. 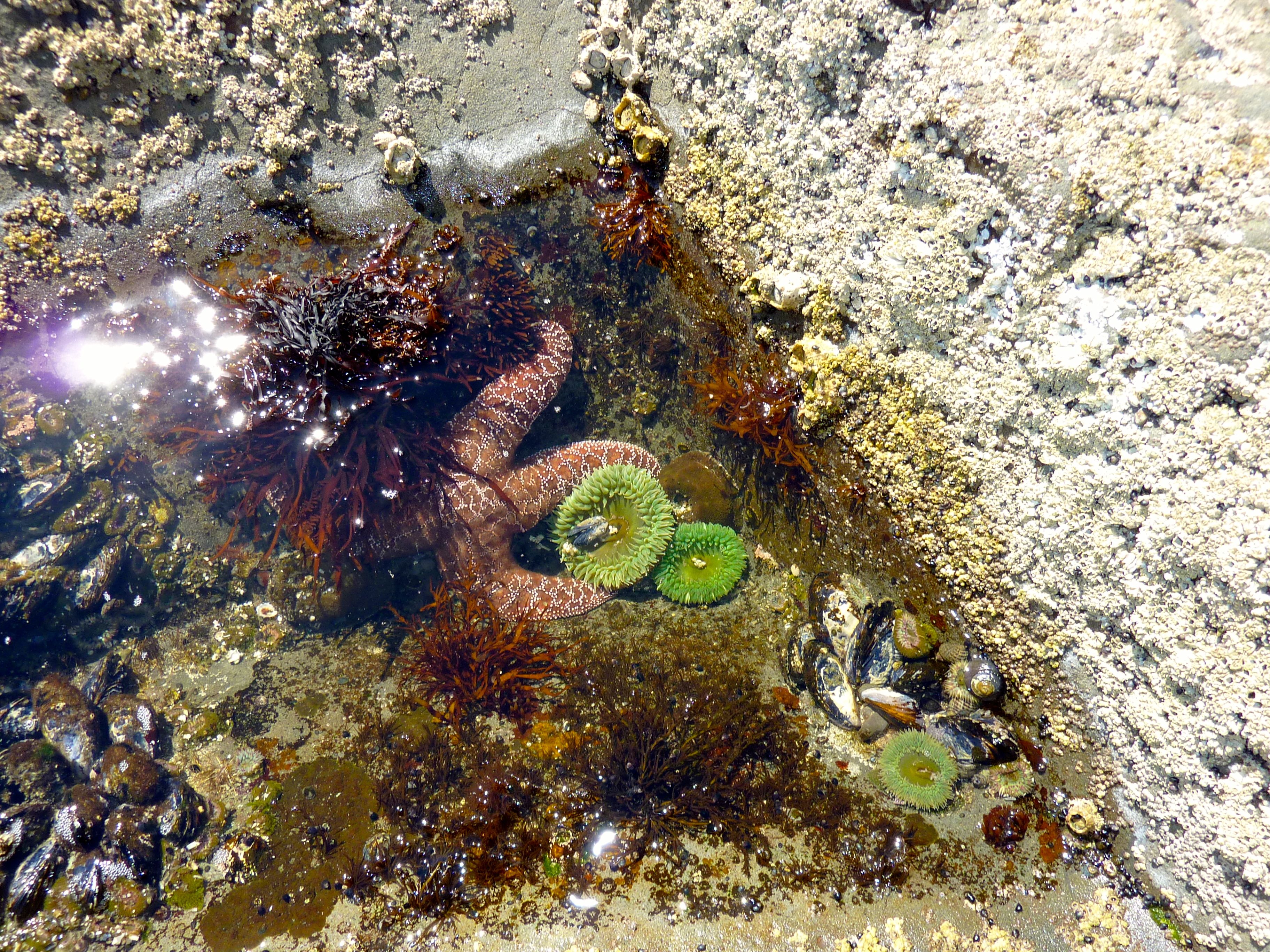 Some of the treasures I found in one of the tide pools. (Just like I found at the Seattle Aquarium!) 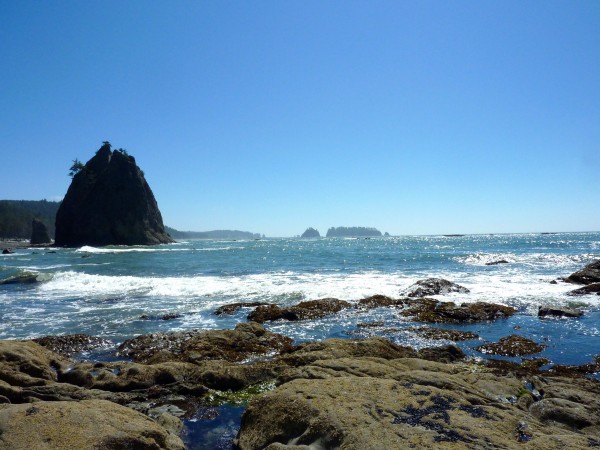 We were having so much fun exploring that we kind of forgot about the rising tide. We almost got stuck!

After we narrowly avoided being stranded at sea, at my insistence we drove 1 1/2 hours to the Hoh Rainforest. I’m sure this spot is a sight to behold in the rainy season, but with August’s lack of rain, the moss had dried and was honestly a bit unremarkable considering the effort it took to go out to visit. 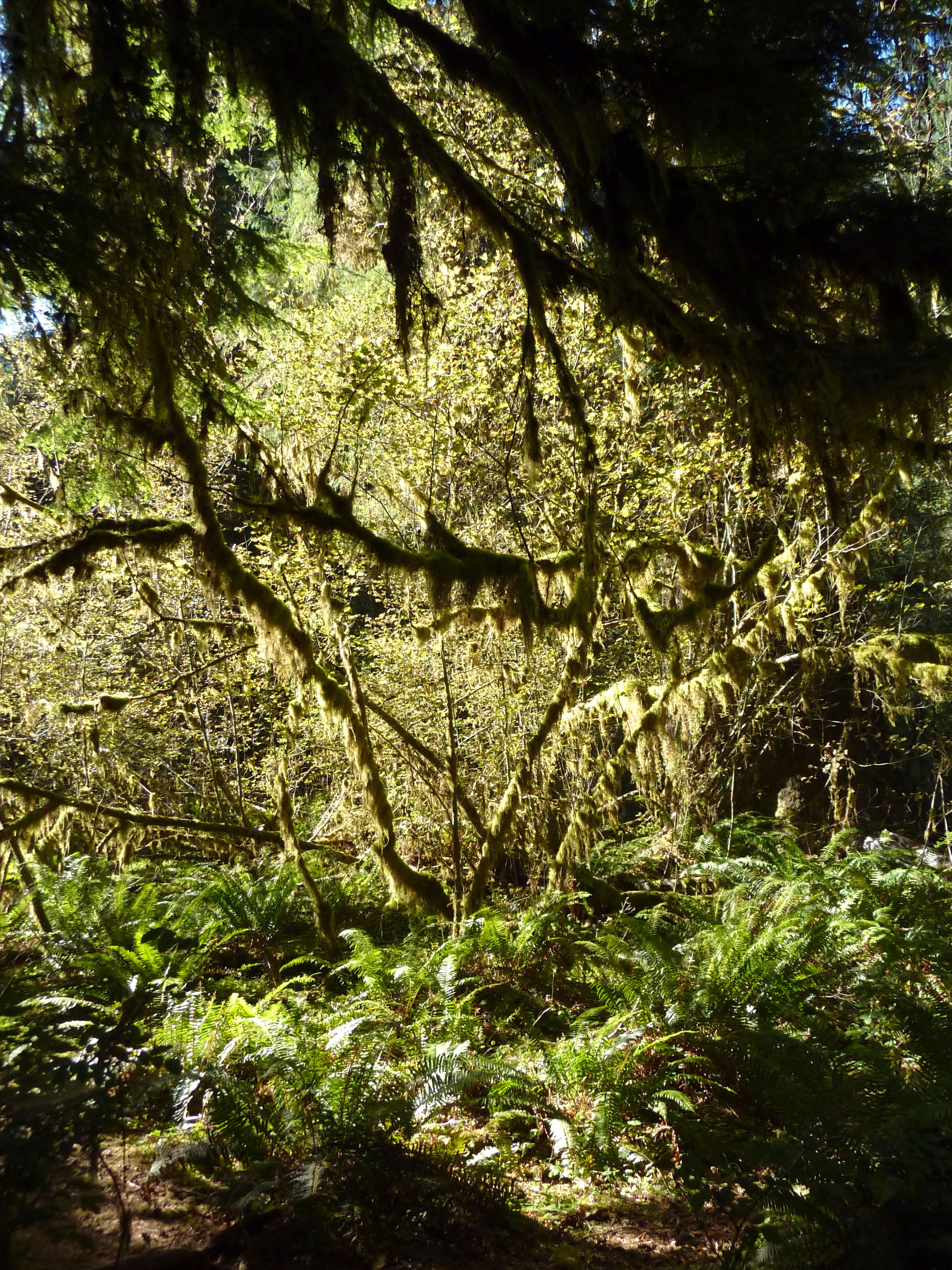 A pretty shot of the Hoh Rainforest. 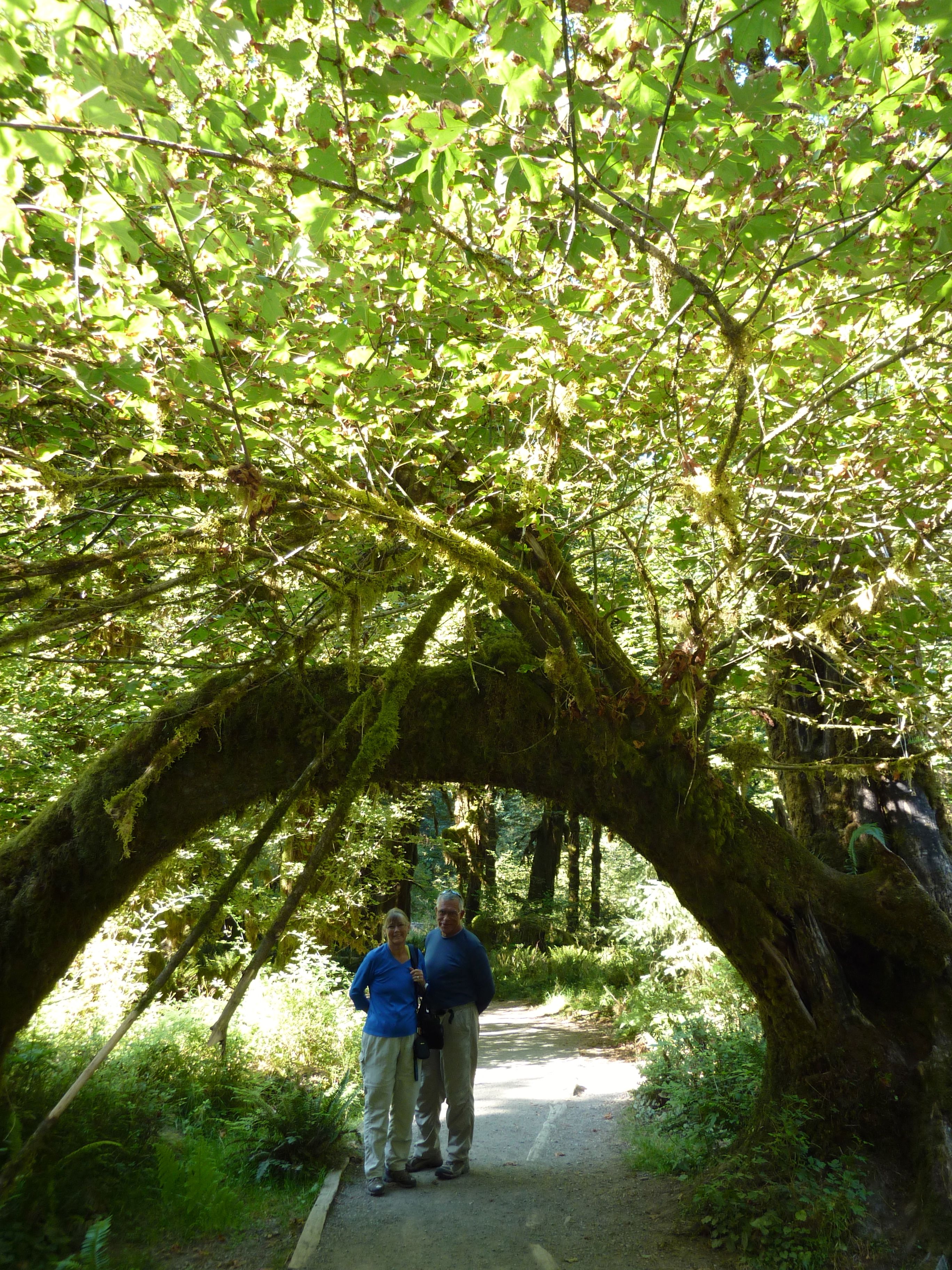 Mom and Dad pose under this curved tree.

After a few small hikes at the Hoh Rainforest, we rushed to try to catch sunset at Ruby Beach. Another hour long drive and we were there… just in time to catch sunset’s perfect light. 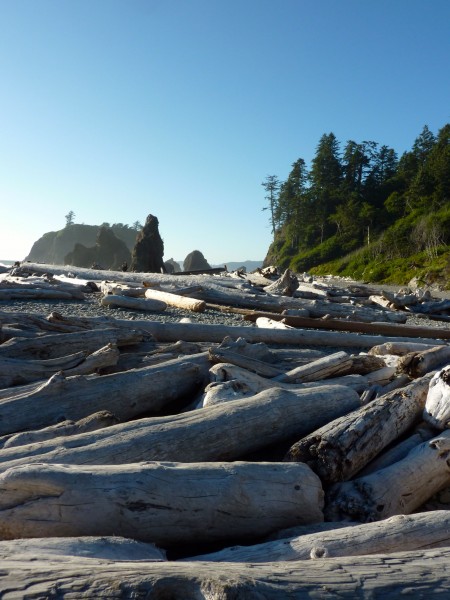 Our first view of Ruby Beach showed a shoreline littered with driftwood. 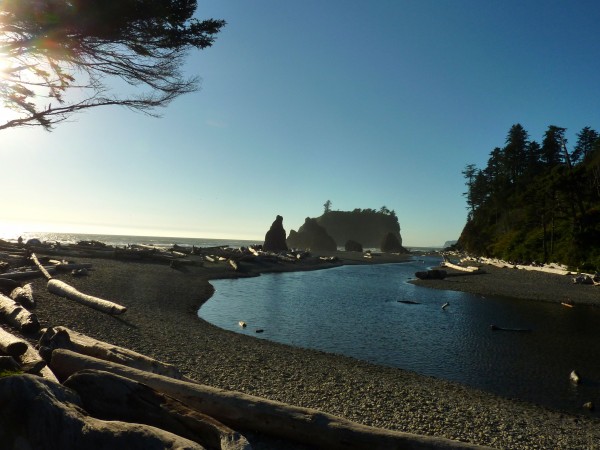 But then we saw the beach open up. 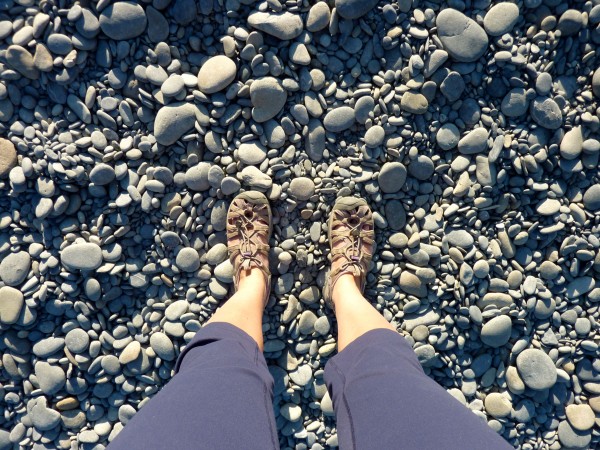 Turns out this beach is really rocky. No sand here! 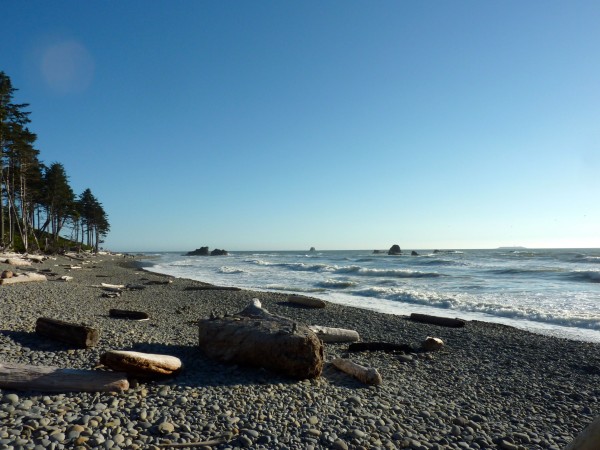 But it sure is beautiful! 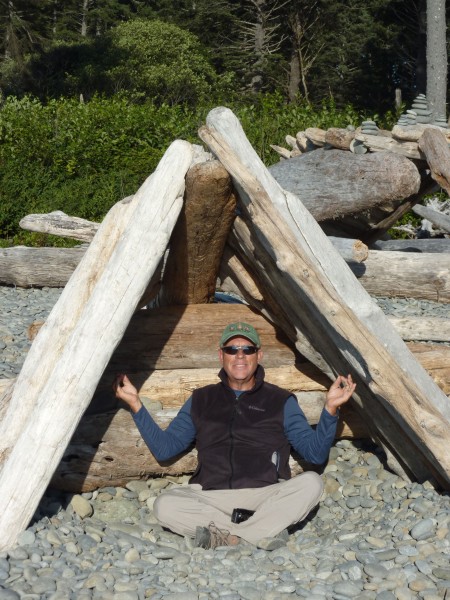 Dad and I both found a spot to have a little “zen” moment. 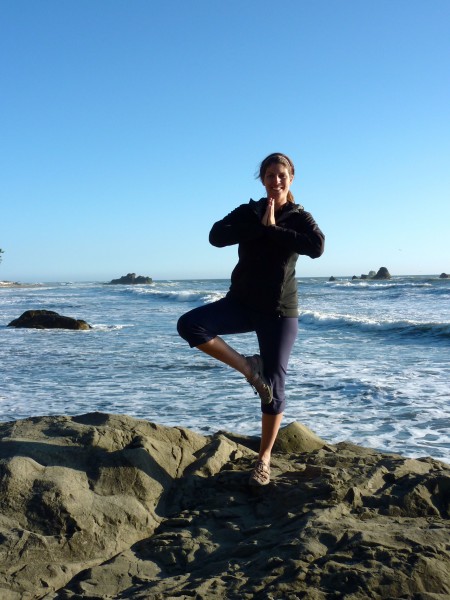 Come back tomorrow for all the scoop on the last day of our trip when we visit the top of the alpine mountain peaks of Hurricane Ridge and hike to Soleduck waterfall.