Why Austin Really Is Weird

25 Aug Why Austin Really Is Weird

Posted at 12:00h in Dream, Go by Christina Ricchiuti-Dubin 3 Comments

If I told you there was a place you could swim in one of the nation’s largest spring-fed pools, experience the sight (and smell) of 1.5 million bats flying five feet from your face and eat life-changing Indian food that will make you question the laws of the universe, would you believe me?

What if I threw in there that it was also the self-proclaimed “Live Music Capital of the World”?

Well, this can be none other than Austin, that progressive, reformed city in the heart of Texas known for embracing the unconventional and it’s second but almost equally famous motto, “Keep Austin Weird.”

Yup, that is one of their mottos, their goals and aspirations, if you will, and I was catapulted into the weird world of Austin when the following conversation took place behind me in the shuttle from the airport.

“Did you hear they found diatoms in lichen in South America?!”
“Wow, really? I wonder where they get their silica … just astounding!”
“Hey, do you want to see my phytoplankton tattoo?”

Well, my friends, the weirdness didn’t end there so I decided to highlight the top experiences of my trip that confirms Austin really, truly, is weird. Like, out there. Far out there. 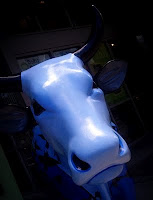 Oh, hello there! You might see a bovine here or there in this post as well. The city was overrun by these giant porcelain pieces of art and I feel compelled to share them. OK, back to the weirdness.

Weird water
In Austin, I discovered the best and only way I ever want to swim from now until forever.

Enter Barton Springs, a 3 acre spring fed natural pool hovering at a near-constant and revitalizing 68°F year-round. Why does swimming in a cool spring trump dunking in oceans, lakes and pools? Well, because you don’t end up with sand in the crotch of your bathing suit, duck poo clinging to your arms or red chlorinated eyes. The water is so clean you can go ahead and take a sip while you swim. Weird, yes. Refreshing, double yes.

Austinites love their Congress Bridge bats if not for their nightly awe-inspiring display of nature, then for the 20 thousand pounds of insects these critters consume each evening. True story, I wasn’t bit by a single bug the entire week I was in Austin. In fact, I don’t remember even seeing a bug … anywhere.

But if this occurrence isn’t weird enough for you, this bat-fact will surely do you in. When mama bats are ready to give birth, their babies weigh as much as one-third of their mothers. Not impressed? Well, that would be equivalent to a human giving birth to a 40 pound baby. 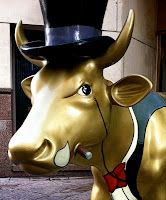 Oh, another one of you cows popping up again. And with a top hat and spectacle, no less. Well, it is certainly a pleasure to meet you, you weird gold-plated heifer!

Weird food
Well, it’s not the food that was weird so much as the fact that to me, BBQ was not the best food to be had in Austin.

The best meal I had in all of Austin was at a hipster Indian joint called G’raj Mahal which consisted of a handful of mismatched tables and chairs outside under large canopies with a pile of incredibly skilled chefs shoved into a 10’x4’ trailer pumping out naan and lassi’s at breakneck speeds.

G’raj Mahal is very unassuming when you walk up to it, but the warm-spirited staff swiftly seat you and that’s when the scent of curry and cardamom come charging through your nasal passages like a stampede of odiferous stallions.

No, you can’t have any. Besides, cows, Indian food … I know you’re sacred and all but it’s really just weird that you even showed up.

What’s even weirder is that while you’re enjoying some of the tastiest Indian food you may ever try in the States, you can gaze upon the wondrously recycled contraptions created by the Austin Bike Zoo. These folks work to inspire public creativity and happiness by parading stunning bicycle works-of-art around Austin and in other cities across the country. Check out this snake they made out of recycled siding and soda bottles. 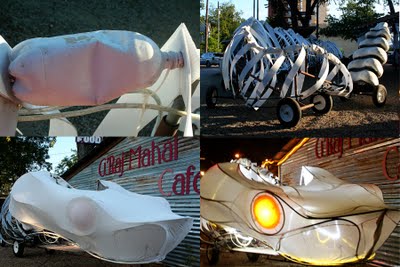 So weird and so very, very cool.

Weird stores
Bacon lip balm? Roast beef bubble gum? Ranch-flavored dental floss? I’m struggling internally whether these items are weird or just plain nauseating but at Big Top Candy Shop you can have your fill of these and other beyond weird items along with throw-back treats like Valomilk and decadent in-house chocolate goodies.

Yes, you saw right. Foie gras bubble gum. Will the weirdness ever end!?

So, have I convinced you that Austin is indeed one of the weirdest cities you can ever visit? Before I left Austin, I heard about deep-fried avocado and thong-donning cowboys so sounds like there is still a lot of weird to experience. I guess it’s true that “the stars at night, are big and bright, deep in the (weird) heart of Texas!”

Liana Vitali, founder of Blackberry Food Blog, eats too much. She also has too much fun using her handy Blackberry smart phone to capture her gastro-travels and share them with the whole wide web. Keep track of her on twitter @BBFoodBlog.