Posted at 12:06h in Pack by Christina Ricchiuti-Dubin 1 Comment 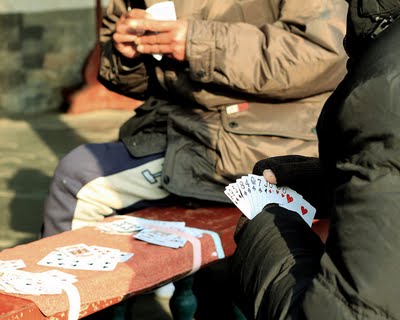 When you’re on the road, it can be hard to find the space to bring much entertainment along for the ride. Luckily, a great night can be had with little more than a deck of cards or a pad of paper and a great group of friends.

Here are a few of our favorite backpacker games with a little international flair, sure to make you the life of the party!

This German geography game is perfect for the international traveler and is reminiscent of the board game “Scattergories.”

The goal:
To outwit your competitors with your superior knowledge of obscure geography and travel themes.

How many people:
At least 2

Is there drinking involved?
Drinking’s not integral to gameplay… although you’re welcome to imbibe if you feel so inclined!

Scoring:
Each person is scored per category. If you are the only person to come up with what you have written, you will receive 10 points. If others came up with the same selection, then you get 5 points. If you blank and don’t write anything, you don’t get any points. (So, clearly out of the box selections are the way to go!)
The game ends when you get tired of playing! You can set a winning score if you want to have a definitive end point.

Mushroom is a really fun card game that I learned while backpacking throughout New Zealand. It’s a lot like Jenga… only instead of a tower of blocks, cards are funneled out while balancing on a small surface (bottle top or cup) until it resembles, well, a mushroom. 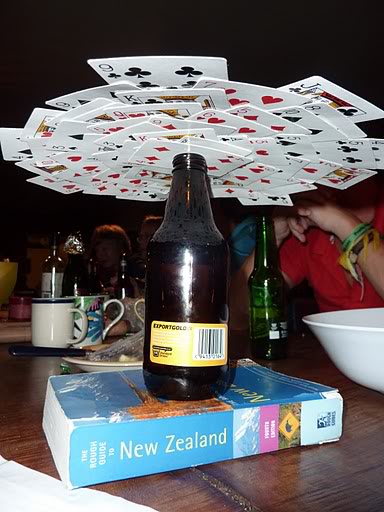 The goal:
Keep the mushroom from toppling over… or else, you lose.

How many people:
2+ players (more is definitely better!)

Is there drinking involved?
Yes (although what you drink is completely up to you.)

If they guess the correct color, the value of the card is the number of “sips” the player can distribute… either all to one person or split amongst the other players, however he or she decides. They also choose someone to put the card on the bottle or glass using only 2 fingers.

If they do not guess the correct color, then they drink the value of the card themselves and place the card on top of the glass using only 2 fingers.

If only a few cards fall, the person responsible must put the cards back on the mushroom and drink the value of the fallen cards.

If all of the cards fall, the person responsible loses the game and must drink the rest of their drink.

41 is a simple (I swear!) draw and discard card game from Indonesia. This game has the name “41” because it is the highest score you can hope to obtain. 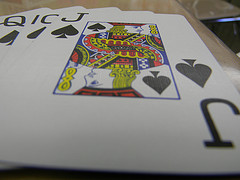 The goal:
To collect four cards of the same suit with as high a point value as possible.

When the game ends (either because a player has 4 cards of the same suit, or because the stack has run out), all players show their cards and count their scores.

In each hand, the player must select one suit (hopefully there is a dominant suit) as positive points, while all other suits will be considered negative points.

If you are unlucky and have no cards of the same suit, then… well, just do your best and pick the highest card as your dominant suit.

In case you were wondering… as mentioned, the perfect score is 41. To get this score, you’d have to have an Ace, King, Queen and Jack all of one suit. Think of this as a royal flush for the game of 41.
If there is a tie, the tied player’s negative cards are used to decide who wins. (The higher the value of the negative cards determine the loser.)

The player with the highest score is the winner, and the one with the lowest score is, obviously, the loser. Normally, no running score tally is kept. Instead, the loser deals and the winner begins the next hand.

Do you have any other great backpacker games to add to our list? If so, let us know, because it may be featured on a follow up post!