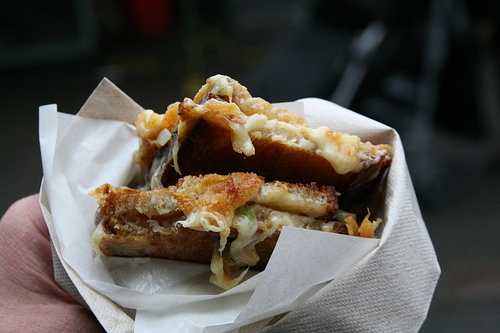 Posted at 13:00h in Long Trip by Christina Ricchiuti-Dubin 1 Comment

Originally posted on GoGirlGuides.com on 4/20/11: 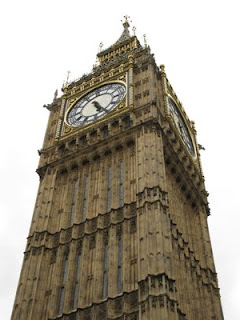 I’m a big solo travel enthusiast, and over the years I’ve gained quite the soft spot for London…

There’s something about the combination of museums with ridiculously important artifacts, fancy high tea, parks with beautiful flowers, world-famous theater, charming accents and the hint of royalty that permeates the entire city that makes London a really appealing place to visit time and time again.

The one thing that London isn’t is CHEAP.

It’s all too easy to spend more than you’d like on a meal that turns out to be less than satisfying.

The good news is that through my various adventures there, I’ve discovered a few eateries that are both delicious and relatively inexpensive (a no small feat in this crazy economy) while also being a quintessentially British establishment to enhance your travel experiences.

Here are a few of LONDON’S BEST CHEAP EATS, each with a haiku to explain how I really feel…

Jet lagged I stumble
To the market’s grilled cheese stand.
Crisp and hot, I nosh.

Ah, Borough Market. There’s so much to describe to adequately paint the picture of my favorite foodie heaven located right on the southern end of the London Bridge.

They’re not stingy with the samples, so with a quick walkabout the market you could easily find yourself full of deliciously free morsels.

The market is one of the largest in London and is quite the draw, so visitors and residents alike converge on this indoor/outdoor space on the three days that the retail market is open to the public (Thursdays from 11 am – 5 pm, Fridays from 12 pm – 6 pm, and Saturdays from 9 am – 5 pm).

The crowds can be crushing at times, so it’s best to get there early to get prime pickings in a more relaxed atmosphere.

As my haiku alludes, Kappacasein’s famous Grilled Cheese Stand is, in my opinion, the ultimate Borough Market culinary treat, and quite possibly the best grilled cheese in the world, all for just £5.

It’s the perfect remedy to jet lag, a hangover or a rumbling stomach!

No trip to London is complete without the obligatory meal of fish and chips, and Rock and Sole Plaice has been pleasing London’s fish and chips connoisseurs since 1871.

This elite status leads to high expectations and while everyone seems to have a differing opinion as to what truly is the best place to get your greasy, crispy chip fix, Rock and Sole Plaice doesn’t disappoint.

This is the perfect spot for lunch or a late night snack…. For as cheap as £5 you can expect to get a nice sized piece or Cod, Rock Fish, Haddock or Plaice and chips, plus there’s also a decently robust menu filled with other British delicacies as well, like Cornish Pasties and Steak and Kidney Pie.

And if you’re lucky enough to have one of those rare sunny London days, there’s great outdoor seating to add some atmosphere to your tasty treat.

Whether thoughts of high tea with its dainty little sandwiches, raised pinkies and trays of desserts seem either completely charming or completely antiquated, no one can dispute that tea is an essential part of the English culture.

Unfortunately, a proper high tea can also end up being very costly.

Luckily, there’s an option that is both supremely luxurious yet is still reasonable for those on a budget.

Kensington Palace has had a host of royal residents from Princess Diana, Princess Margaret, and now even Prince Harry often resides in the palace. The Orangery on the grounds provides an equally regal setting and hosts an amazing high tea each day.

For £14.85, you can expect those idyllic little sandwiches, scones with clotted cream and strawberry jam, desserts and a pot of tea, all within the Orangery’s gorgeous all-white conservatory-like space with columns, huge windows with views of the gardens and regal statues set in recessed alcoves. 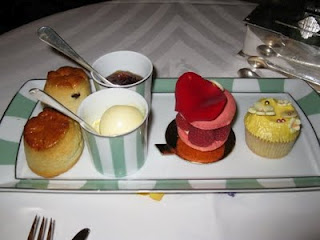 If you’re looking for a good “grab and go” spot (so much sightseeing, so little time…), my best quick pick is Eat.

Providing a diverse offering of inexpensive salads, sandwiches, wraps, soups and sweets, Eat is the perfect place to stock up on supplies before taking your meal outside for a picnic in one of London’s popular parks.

With over 75 locations spread out all over London, you’re sure to run into an Eat along your travels.

Sure, it’s a chain. But Eat uses fresh, quality ingredients and since everything’s made daily it’s a sure bet that whatever you choose won’t feel like it’s been sitting on a shelf for days.

And, the icing on the cake is that it’s really reasonable. Sandwiches will put you back around £3, which is a great deal, even by pricey London standards!

If you’ve tired of the heavy British food and are in the mood to try something a little different, than Wagamama will perfectly fit the bill.

The menu is robust, with lots of freshly prepared pan-Asian specialties ranging from gyoza to ramen, soba and udon noodle dishes and soups to curry and rice entrees, and salads, too!

Entrees average around £8, so you can expect for a filling meal that won’t break your budget.

The vibe is modern and social; long communal tables help solo travelers meet new friends and waiters take your orders on PDAs which transmits directly back to the kitchen so there’s no lag time.

And, while Wagamama may now be an international chain, this noodle bar has its roots firmly in British soil. The first restaurant opened in London in 1992, and over the years has expanded to over 15 spots within central London where you can go to get your noodle fix.