Posted at 23:49h in Dream, Go by Christina Ricchiuti-Dubin 0 Comments
This fantastic guest post is written by Miellyn Fitzwater Barrows, a published essayist and travel writer, a television writer and producer, a produced screenwriter and playwright, and (if that’s not enough) she also writes for games.

I recently spent a Friday afternoon through Monday night in Boston, Massachusetts doing almost nothing that you would expect and having a blast.
The Reason
When Academy Award Winner Ben Britten* invites you to come see him in Boston, you go.

*(As his friends teasingly, but accurately, refer to him.  They made t-shirts that said “What Would Academy Award Winner Ben Britten Do?”.  Really.)

Half of Melbourne, Australia-based Tin Man Games and a dear friend from way back, Ben and his business partner, Neil Rennison, had procured a booth at PAX East.
For the uninitiated, as I was until a few months ago, PAX East is the East Coast younger sibling of PAX from Unplugged Gaming, a yearly conference for gamers and game developers put on by the creators of the on-line comic Penny Arcade.  This year, just under 70,000 people came to Bean Town to check out the latest tabletop, video, and computer games.  This conference covers it all and more with a fiery passion.  They have panels, they have concerts, they have exclusive opportunities to see and play the newest video and board games.  Some people come in costume.  And they stand in line, for hours, for the chance to check out the latest stuff.
As I’m writing a book for Tin Man Games’ Gamebook Aventures, and my husband, Shaun, and I will be creating promotional videos for the games, they invited us to come, check out PAX East, and hang out with them in Boston.
Of course we said yes.
The Transport
JetBlue
JetBlue purportedly has nicer seats and more legroom than the other coach airlines.  I haven’t measured, but this feels true onboard.  They also offer the opportunity to pay an extra $20 to upgrade to an exit row for extra, extra legroom.  We did this on the way back.  At 5’4”, with most of it in my torso, it didn’t make that much of a difference to me, but my 6’ tall traveling companion found it to be a significant few inches.  I can speak to the elbow room, though, and their seats leave just enough for knitting.  I worked on a pair of Red Sox Socks for Shaun.  Seemed appropriate for the trip.
The Conference
PAX East
This three-day conference took place in the Boston Convention Center.  In the lobby, Irrational Games had an impressive installation for the new Bioshock.  I of course had my picture taken here.
Pop Cap Games had a booth in the lobby as well, where they handed out traffic cone hats to promote their game Plants vs. Zombies.  A surprising number of people wore those hats.  They looked ridiculous, but I love them for doing it.  I have since become addicted to Pop Cap’s word game Bookworm.
The lobby was quiet and mostly empty.  You had to go through a set of glass doors to get to the main hall.  Walking out onto the landing overlooking the exhibition floor was a bit overwhelming.  There were so many booths, so much noise, and a rather imposing Pikachu balloon suspended from the rafters overseeing the festivities.
The event had an interesting mix of exhibitors, developers, and fans.  Coming in from upstairs, you’re hit with the scope of this operation.  119 Booths.  69,500 fans.
All the big companies had booths including Bethesda, Rockstar Games, Nintendo, Sony, Pokemon, Dolby, G4TV, Utilikilts…  Oh yes, Utilikilts was there.  If you’re unfamiliar with these manly work kilts with cargo pockets for tools and a modesty strap for standing on ladders, you should check them out.  Ben, of course, has one and he loves it.
Tin Man Games had a booth in Indie Alley, across the aisle from a Anime Arcade-Style game and next to an apparently home-built prototype game with a screen attached to a moving seat.  The guy drove all the gear down from Canada and built it in the booth.
The variety of concepts, artwork, and marketing approaches was vast.  There was much to learn.
I helped Ben and Neil sell the game to passers-by for a good chunk of each day.
It took me a bit to get up to speed on the pitch but by the second day I had it down.  I knew you’d want to hear it so here goes:

“Did you ever read the Choose Your Own Adventure books when you were a kid?  Well that’s what the Gamebook Aventures are, but with light role playing thrown in.  You still have the traditional points where you choose your path, but there’s also some dice rolling, which add an element of fate to the book.  The original books were about 100 sections.  The book that we just came out with is 800, so you get a lot of opportunities for exploration and gameplay.  All of the books are written exclusively for the series and all of the beautiful artwork is hand drawn for the books.  We have five books out right now, with the sixth coming soon.  They’re all fantasy books, and all take place in the same world with its own lore, but we are soon to be branching out into Sci-Fi, Young Adult, and humorous Supernatural Romance.  I’m actually one of the authors, working on the first in a series of the Supernatural Romance novels.  The series is called Love Bites and the first book is Vampire Boyfriends.  This one won’t have role playing, it’s for more casual readers and gamers.  You’re the main character, a female college student who goes to bars and has sex with vampires.  Sometimes you become a vampire, sometimes you just die, and it’s lots of fun.  Right now we have apps for iPhone, iPad, iPod touch, but we’re coming to Kindle, Android, and desktop.  It’s pretty perfect for these types of platforms because it can be so interactive.” 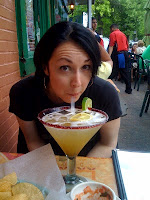 Miellyn Fitzwater Barrows is a published essayist and travel writer, a television writer and producer, a  produced screenwriter and playwright, and she writes for games.  She is currently writing a Gamebook Adventure called Vampire Boyfriends for Tin Man Games. She knits like a madwoman, makes a mean butternut squash soup, and is the master of the four day weekend trip.  She believes very strongly in bad television, good beer, and bragging about one’s significant other. She lives in Washington, DC with her brilliant editor/filmmaker/chef husband and her plant, Rufus.  Her website is 3000words.com.