Packed Suitcase | New Zealand… there and back again
112
post-template-default,single,single-post,postid-112,single-format-aside,ajax_fade,page_not_loaded,,qode_grid_1300,hide_top_bar_on_mobile_header,qode-content-sidebar-responsive,qode-theme-ver-13.2,qode-theme-bridge,wpb-js-composer js-comp-ver-5.4.5,vc_responsive

New Zealand… there and back again

01 May New Zealand… there and back again

Posted at 03:09h in Go, My Travels by Christina Ricchiuti-Dubin 1 Comment

For the past 5 years or so, I’ve really yearned for some tangible time off to travel. One or two weeks just doesn’t always cut it, especially if you want to go far, but quitting your job for the sake of travel never made much sense to me either (especially since I graduated early from college so I could get a jump start on my career!) So, if you think about it, having been given the opportunity to actually take a break without actually taking a break was a blessing in disguise and I’m so grateful that I was able to seize the moment and just… go.

On my trip, while I was technically traveling alone, I made countless friends from all over the world through backpacking.

Emma from Sweden, who (after traveling for a year) was 3 days away from going home.

Hyunsu from Korea, who not only sat next to me on the bus for the entire North Island, but who also stuck with me through the entire 13 miles of the Tongariro Crossing… 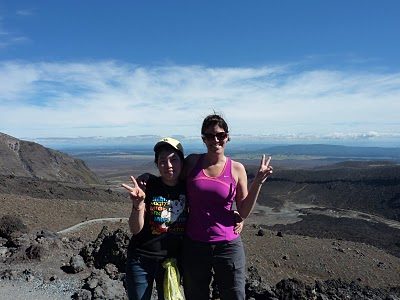 Emily from Florida, who somehow realized I had a knack for maximizing resumes and used my talents to their fullest in Raglan (fingers crossed!)

Dan, Stephen, Carol, Anna Lou and the rest of the Stray gang who I shared the North Island, sky diving, countless bottles of wine and some seriously fun times with. 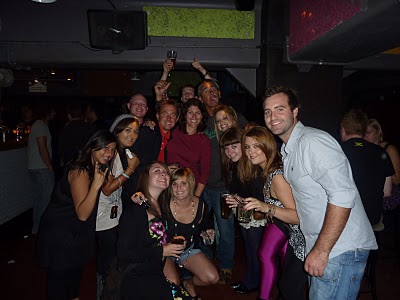 Caroline, my Irish friend who also works in TV. We compared our respective media industries over dinner and a pub crawl in Queenstown.

Rachael, Whitney, James, Morgan, Kyle, Dylan, Phoebe and Sarah – my Milford Track buddies. After hiking miles and miles we’d stay up late into the night playing card games like Bush Rummy and Yahn F (actually, we’d stay up until 10 pm, but that was as late as we could stay up because that’s when the power generators were turned off!) 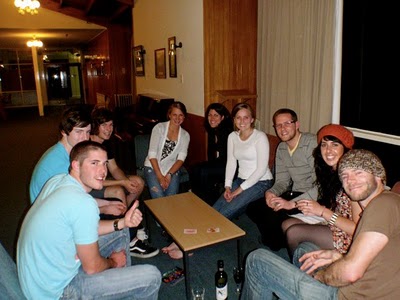 I also learned a few very important lessons about backpacking:

Lesson #1- Don’t pack your stuff in plastic bags
You may think it will help keep everything organized in your pack, but trying to pack up at 6 am while the rest of your dorm mates are sleeping will just make you lose friends. Fast.

Lesson #2- Pack practically, but add a little flair
I packed pretty darn light considering I had to pack warm AND cold weather clothes, plus all of my hiking gear. I did fairly well except that I didn’t bring one cute outfit suitable for going out. Therefore, I ended up in sweaters and t-shirts most of the time when everyone else was dolled up. Just one cute shirt would have done the trick.

Lesson #3- Bring earplugs, an eye mask and a flashlight
Because undoubtedly, your room will be loud, bright or dark at some time or another.

AND LAST BUT CERTAINLY NOT LEAST…

Lesson #4- Bring a towel
I didn’t, and ended up having to buy the last one on the shelf in Hahei my first week on the trip. Try explaining this every day you move into a new hostel so people don’t think you’re weird: 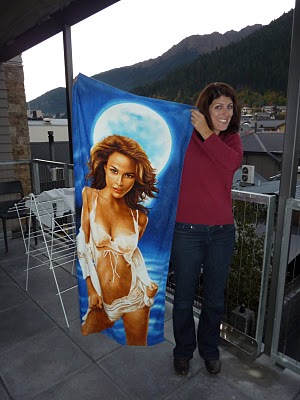 So now, just a few days after I’ve gotten back from my traveling adventure, the jet lag has just about worn off. My photos are sorted and posted on Facebook, and now all of my blogs are written. It’s officially over.

I’ve resolved to do a few things that I didn’t used to do like get up earlier, start doing yoga, go on more day trips and make pesto more often. Strange resolutions, I know, but I guess that’s what happens when you’re half a world away. Pure randomness.

In conclusion, I had an absolutely amazing time that flew by in the blink of an eye. Now I’m home and ready for the next chapter. Next stop: A NEW JOB! I’m ready. Bring it on.

((But between you and me- if I ever get laid off again, you better believe I’ll be on a plane faster than you can blink to someplace cool to do this all over again. Probably somewhere listed here… there’s always a silver lining.))