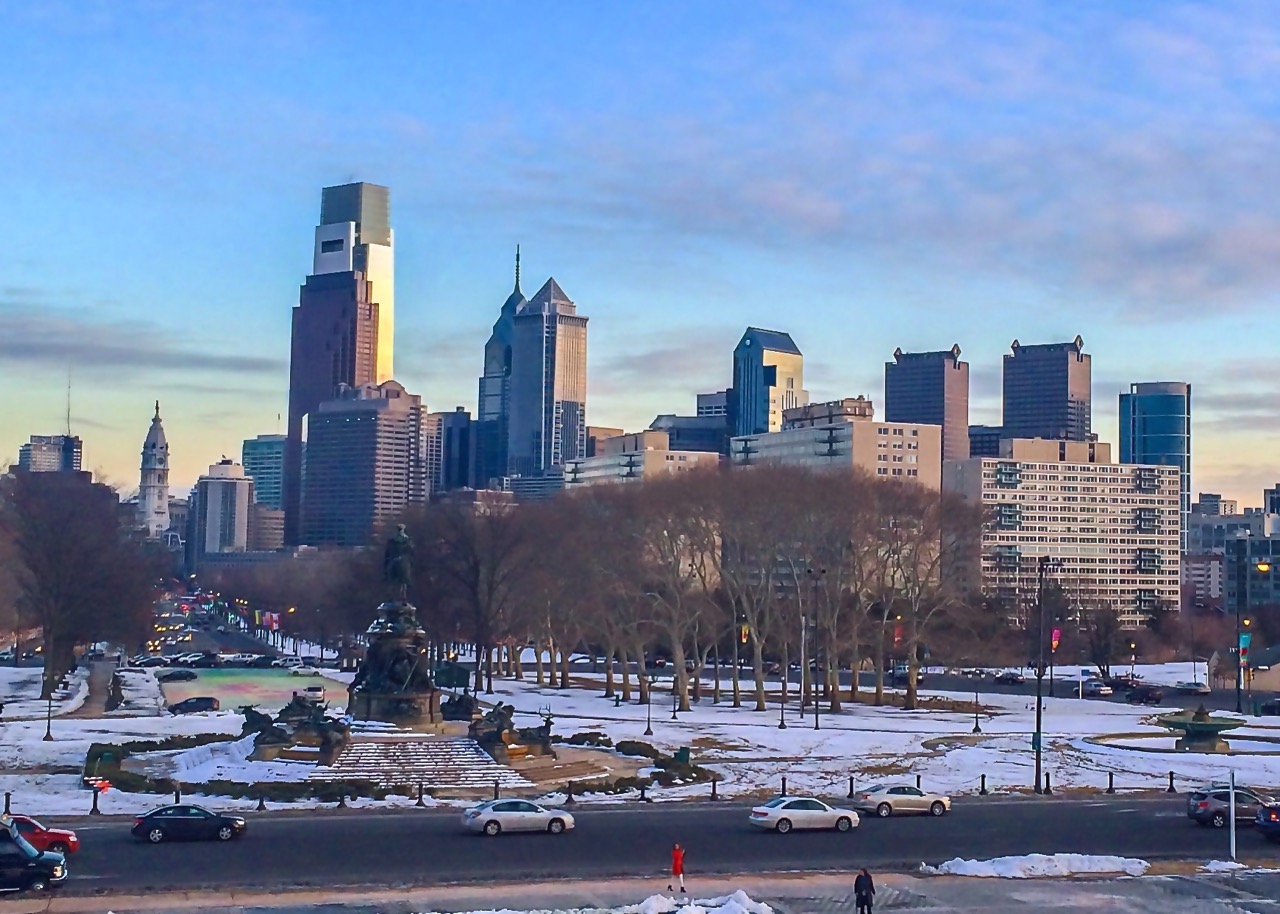 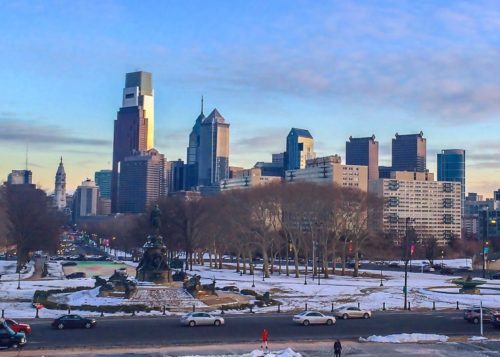 Over the past few hundred years, Philadelphia has served as a Quaker colony, a meeting place for the Founding Fathers, the long-ago capital of the newly formed United States and, more recently, the birthplace of one very beloved cheese-drenched steak sandwich.

If I had to describe Philadelphia in 1 word, I would say that Philadelphia is unexpected. On one hand, this is a city that is as beautiful and austere as you would imagine, full of historic landmarks, museums and lovingly-preserved buildings.

But amidst all of the austerity is an underlying hipness and modernity.

This is a city that values creativity, art and taking chances. From its 3600+ murals (a 30-year public art project rooted in a desire to stop graffiti), to its pop-up beer gardens hosted by the Philadelphia Horticultural Society in underutilized public spaces, to its notable restaurant scene that has turned vegan food into fine dining, Philadelphia is full of unexpected gems for tourists looking for a diverse weekend getaway.

Best time to visit: Year round, but April through November is particularly nice

Best suited for: Couples, Girlfriend Getaway, Families, Friends, Solo Travelers… this trip is for everyone 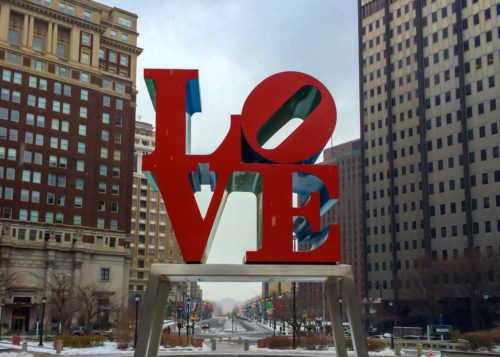 Love Park, in the heart of downtown Philly

1.) Jump aboard a double decker with the Big Bus Tour.

Philadelphia first-timers and veterans alike will all find something to love about the Big Bus Tour. Over the course of 27 stops, newbies will get their bearing and learn where to find all of the city’s best attractions, while even Philadelphia experts will learn something new during the entertaining and informative tour. Jump aboard at the Independence Visitor Center (Stop #1) and stay on for the whole 1.5 hour round trip before plotting your next move. 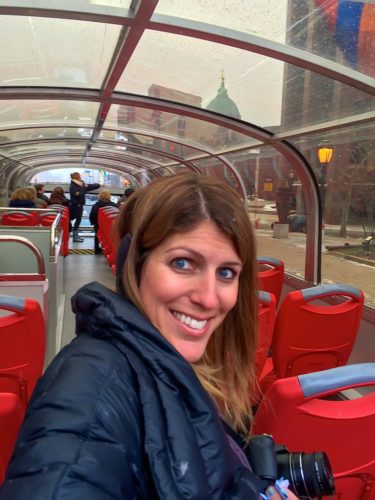 All aboard the Big Bus!

Once you’ve completed the Big Bus circuit, hop off the bus at the Visitor’s Center and explore some of Old City’s most notable spots. 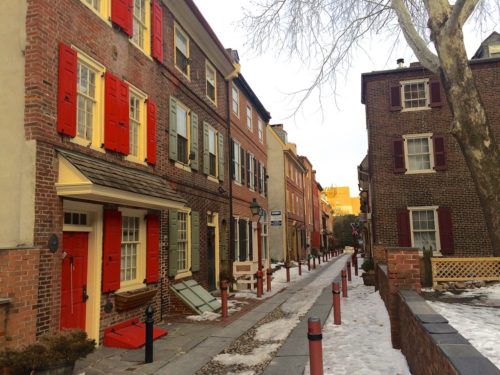 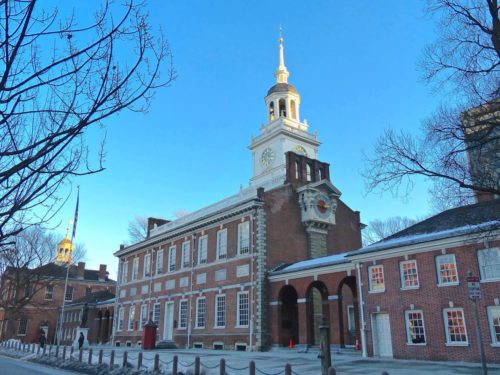 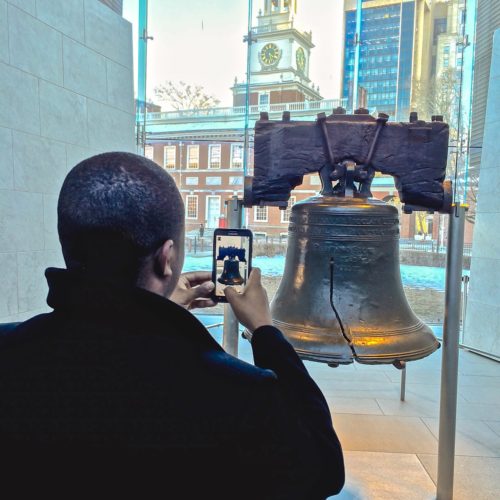 Obligatory photo of the Liberty Bell

3.) Have a late lunch at Reading Terminal Market

From the Old City, walk about a half mile along Market Street to Reading Terminal Market. First opening its doors in 1892, today the historic market has over 80 vendors and sees around 17,000 visitors each day. From roast pork sandwiches at DiNic’s to deep-fried Pennsylvania Dutch treats at Beiler’s… it’s safe to say that there is something here to satisfy any craving. But if you can’t decide, here are my picks of the best things to eat at Reading Terminal Market. 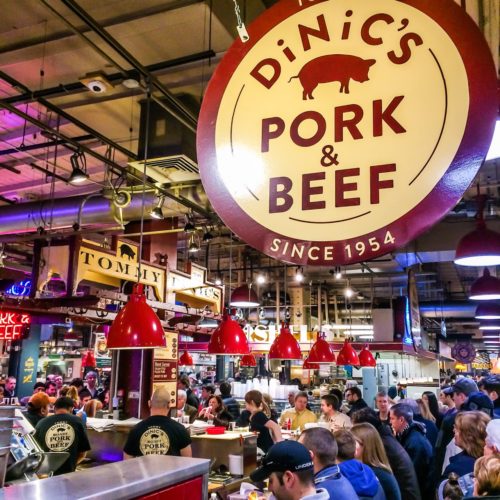 The line at DiNic’s may seem long, but if you can snag a spot at the counter, you’ll be able to skip the line (and have a comfortable place to eat your sandwich!)

4.) Check into your hotel

By now, it should be late afternoon– the perfect time to check into your chosen hotel!

Stay in the heart of Philadelphia, in one of the hotels in the Center City district. My pick? The Loews Philadelphia, just steps away from Reading Terminal Market. Recognized as the world’s first modernist skyscraper, the decor of the Loews keeps with the modern theme. Crisp lines, chrome fixtures with a chic black, white, red and grey color scheme create a minimalist retreat in the heart of downtown. (Rooms from $239/ night.) 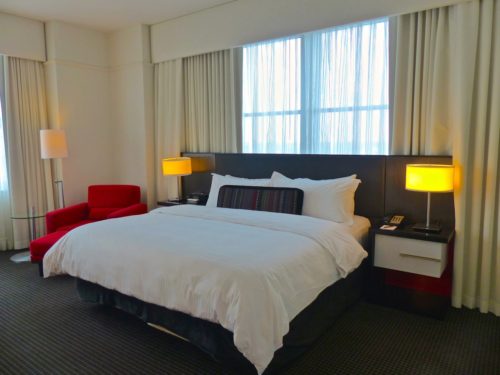 A king room at the Loews Philadelphia 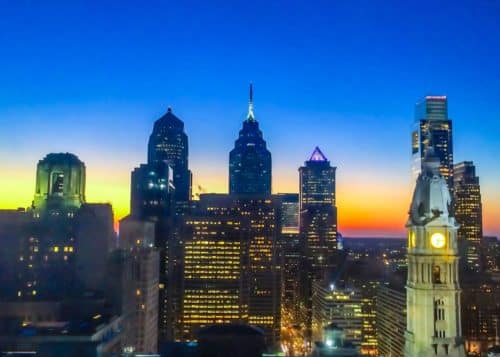 TIP: Request a room on the upper floors to get treated to a spectacular view of the Philadelphia skyline. Wowza!

Within Center City is another smaller sub-neighborhood, Midtown Village. Known as a hub for hip bars, boutiques and restaurants, it’s the perfect place to grab some pre-dinner drinks. (I know, all these neighborhoods can be confusing. Just head to 13th street between Market and Locust Streets and you’ll be good to go.)

Vintage: A rustic wine bar known for its flights and a impressive list of wines and beers.

McGillin’s Olde Ale House: This Irish pub is the oldest bar in Philadelphia with a solid beer list.

Charlie was a sinner: A small, dark restaurant with a speakeasy feel, known for craft cocktails and upscale vegan bar food. 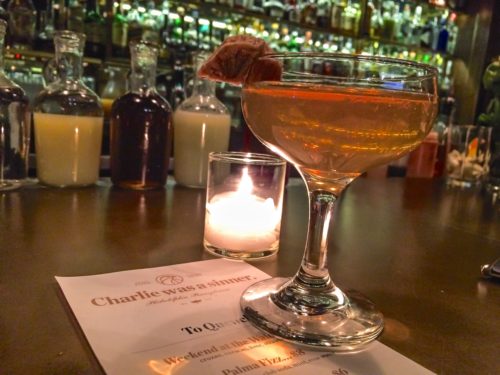 A bourbon cocktail from Charlie was a sinner. is a MUST!

After a drink (or two) head out for dinner at one of Philadelphia’s many standout restaurants. Yelping a restaurant is half the fun, and I don’t want to ruin that for you (!), but to get things started I’ll share my favorite meal in Philadelphia: Talula’s Garden.

Located along Washington Square, Talula’s Garden is a standout in a city that has no shortage of well-regarded restaurants. A collaboration between restauranteurs Aimee Olexy and Stephen Starr, Talula’s Garden provides inspired seasonal American dishes in a rustic, inviting farm-house atmosphere. From the outdoor courtyard, to the bustling, warm interior, it was an inviting glimpse of spring to this winter-weary traveler. (And the food was just perfection– don’t miss the cheese plate!) 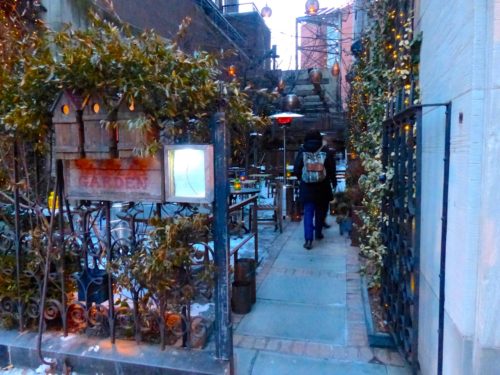 The entrance to Talula’s Garden– I imagine these outdoor seats are a hot ticket in the warmer months! 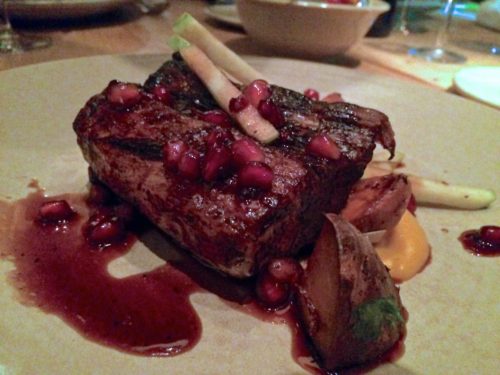 After a good night’s sleep, I’m sure you’ll be eager to continue your Philadelphia exploration! If you opted for the 2 day pass, hop back on the Big Bus and head to stop #11– Eastern State Penitentiary. (Otherwise, you’re in for about a mile and a half walk.)

Upon opening in 1829, Eastern State Penitentiary once aimed to rehabilitate prisoners using a Quaker-inspired method of isolation and penitence. Today, the prison-turned-museum is known for its grand architecture (and spooky atmosphere) and is one of the city’s most popular attractions… especially in the fall, when it turns into “America’s largest haunted house.” 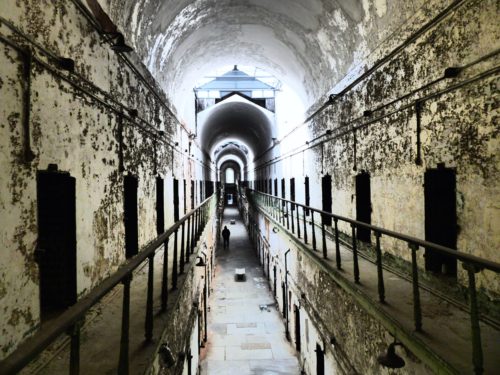 A lone figure walks a cellblock at Eastern State Penitentiary 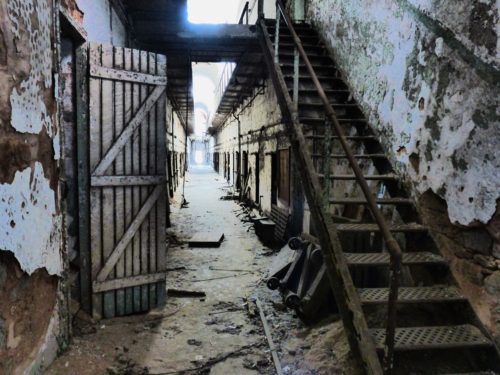 The Benjamin Franklin Parkway is the cultural hub of Philadelphia. Running diagonally through the heart of downtown, a strip of green space is flanked by the city’s best museums. From the Penitentiary, it’s about a half mile walk to the Philadelphia Museum of Art, which is a good place to start. 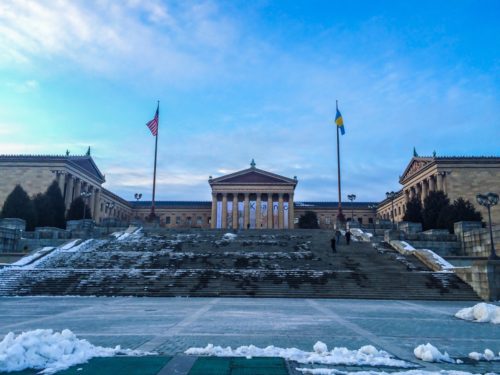 The exterior of the Philadelphia Museum of Art 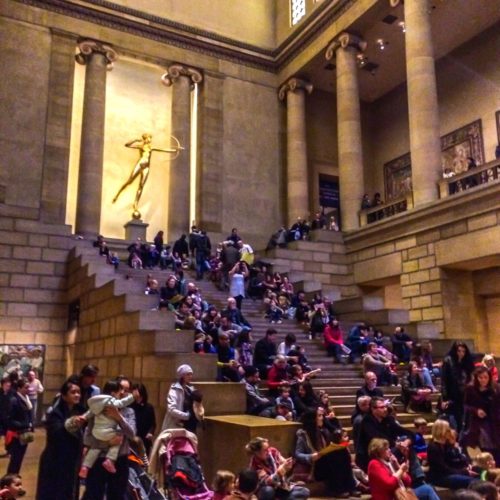 The great stair hall, with the golden statue of Augustus Saint-Gaudens’s Diana standing guard above 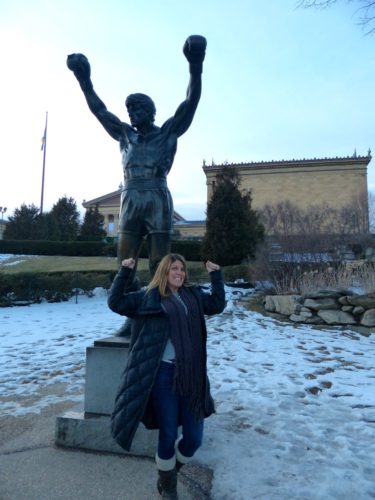 The bronze Rocky statue from Rocky III is placed at the foot of the Philadelphia Museum of Art, giving everyone a chance to feel like a champ

Other museums worth checking out:

The Rodin Museum, one of the largest collections from the thoughtful French sculptor. 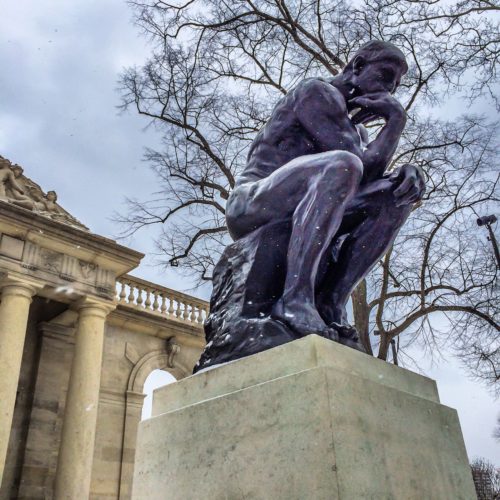 A replica of Rodin’s The Thinker outside the museum

Kids will love the fun and interactive science-themed Franklin Institute. 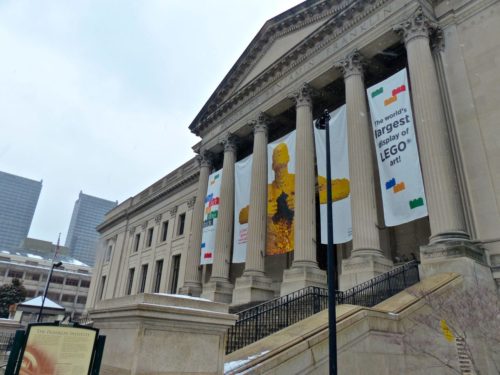 The Barnes Foundation features one of the largest collections of post-impressionist art, with pieces by Renoir, Cézanne Matisse, Degas, Picasso and more. (TIP: It is highly recommended to make reservations in advance.) 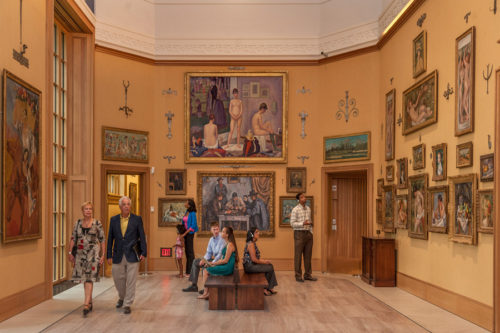 9.) Decide for yourself who has the best cheesesteak in town

End the trip with a Philadelphia staple, the Philly cheesesteak. Two places, Pat’s King of Steaks and Geno’s Steaks often vie for the title of “best cheesesteak in town,” and their extremely close proximity to each other (they share opposing street corners) makes deciding the winner convenient for travelers just passing through. It’s a little far out of downtown, so it’s the perfect place to stop as you prepare to leave the city and head home.

For my verdict, and the lingo needed to order a cheesesteak like a local, check out my post: Pat’s vs. Geno’s: A Philly Cheesesteak Taste Test. 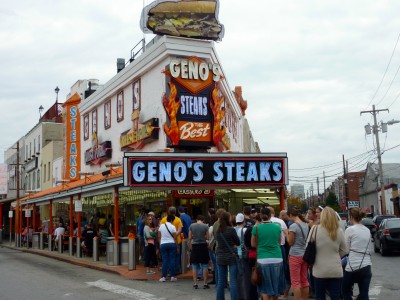 The line at Geno’s… don’t worry, the line move fast

DID I MAKE IT TO ALL OF YOUR FAVORITE PHILADELPHIA ATTRACTIONS? SHARE YOUR THOUGHTS IN THE COMMENTS BELOW!

**DISCLAIMER: Many of my meals, accommodations and activities for this trip were provided by Visit Philadelphia. All opinions and recommendations are completely my own.**