Where I’m Eating: The Alley Light in Charlottesville, VA 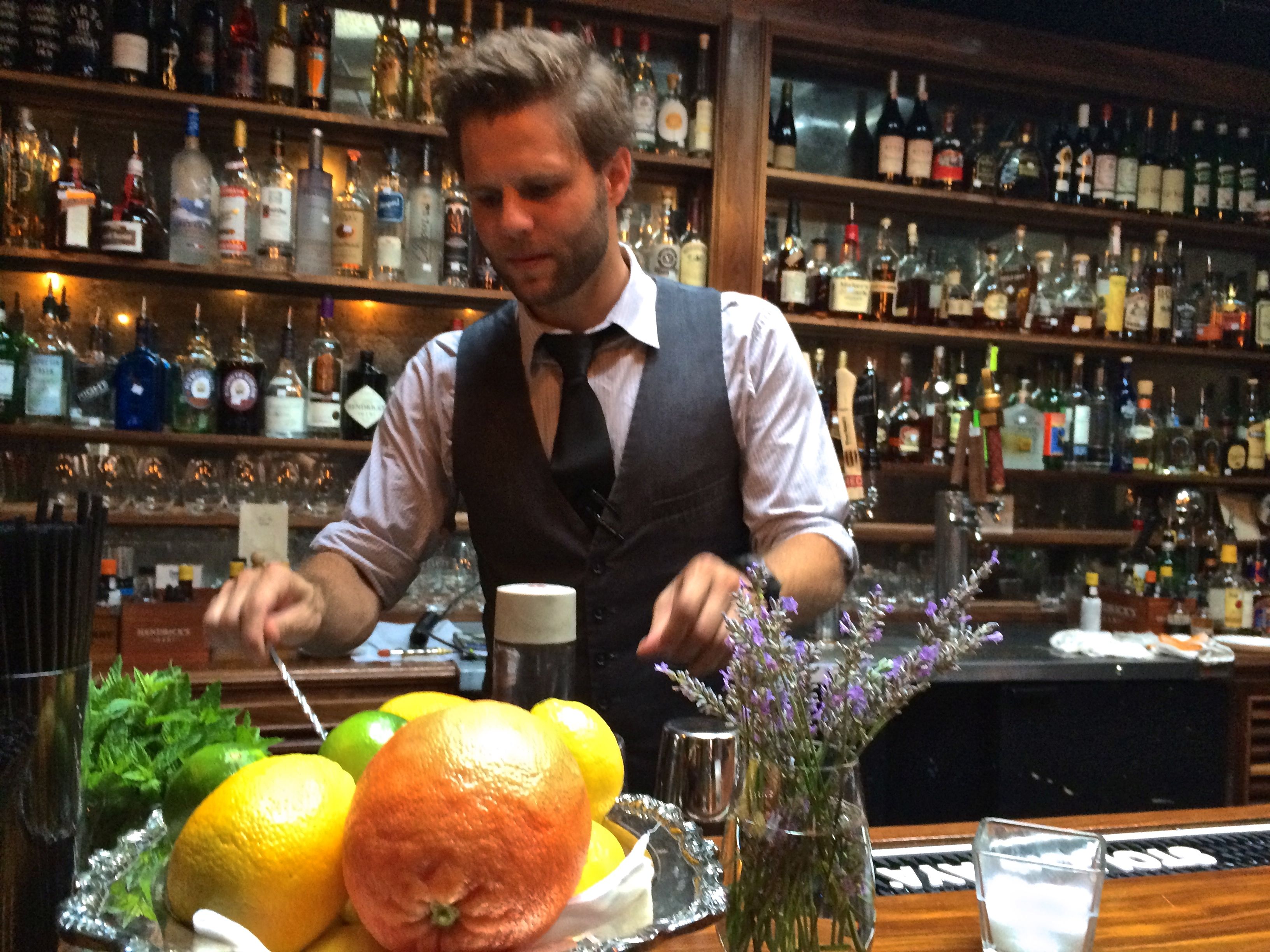 02 Jul Where I’m Eating: The Alley Light in Charlottesville, VA

The Alley Light is a blink-or-you’ll-miss-it culinary gem in the heart of downtown historic Charlottesville. Opening in February 2014, it’s already gotten a lot of buzz, so I was eager to check it out. A nondescript handwritten sign points the way to an alley with a single light above a single door, leading to this upstairs speakeasy-esque restaurant and bar featuring seasonal small plates and handcrafted cocktails.

There are no passwords, no secret handshakes and —believe it or not— no pretentiousness, but for those lucky enough to snag a reservation, a delicious meal in a hip space awaits. 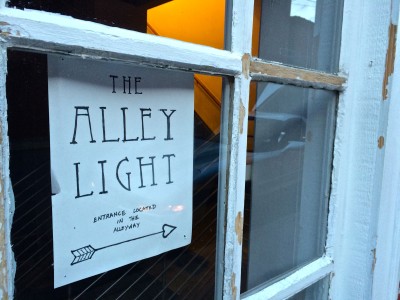 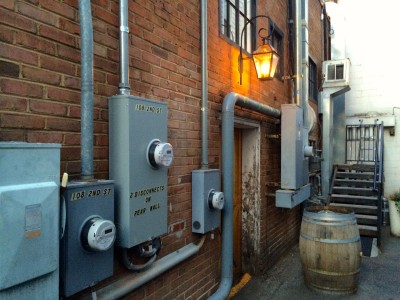 The alley… and the light

WHAT DOES THE INSIDE OF THE RESTAURANT LOOK LIKE?
You’d think a hidden place like this would be dim, but skylights and big windows provide lots of natural light. Eclectic furnishings, rows of unique liquor bottles wood-paneled floors and dark industrial ceilings create a very hip and yet comfortable feel.

Despite the smallish space (though it’s bigger than I was expecting), there are 4 different seating options. There’s a bar, high top tables, two top tables (a touch too close together for my taste) and two comfy leather couch/chair seating areas each suited for parties of around 6 people. 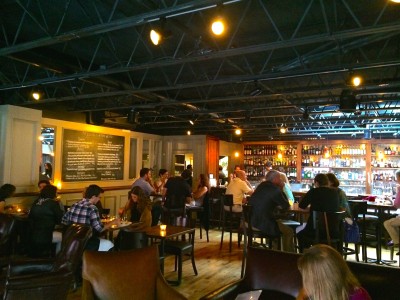 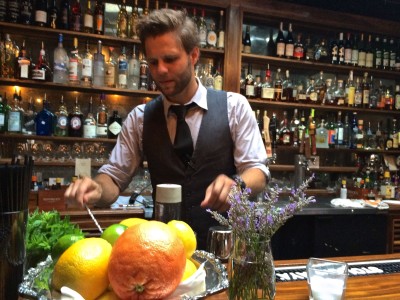 A bartender whips up a handcrafted cocktail

WHO I WENT WITH:
For this dinner, I was joined by some very special twitter friends. John Park, a local foodie based out of Roanoke with a big presence on social media (@HungryAsianRke), his wife Sharon (@MrsHungryAsian) and Amy Balfour, a freelance travel and guidebook writer (@AmyCBalfour).

DESCRIBE THE CROWD
The crowd is diverse— we saw everything from young couples on their first date to groups of twenty-somethings, as well as older patrons. Most would feel comfortable here, however I’d leave the children at home for this establishment. It’s definitely best for those that are 21 and up.

WHAT WE ORDERED
We wanted to try a lot of the menu, so we ordered a smattering of plates to share. Including: 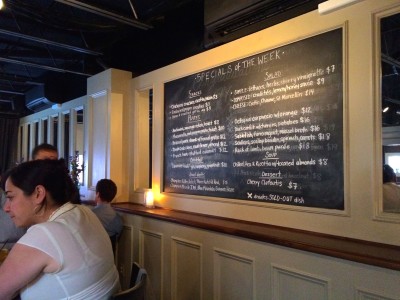 The extensive list of weekly specials… it was nearly as long as the regular menu! 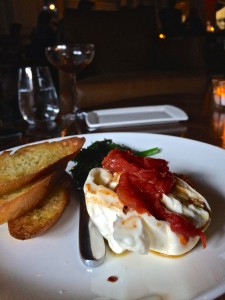 The mozzarella, which was similar to a creamy burrata, with red pepper pesto and garlic toasts

THE BEST THING I ATE
After our meal, John had the smart idea to take a poll of our favorite and least favorite dishes. It was really hard to decide, because our meal was overwhelmingly delicious. But, when forced to make a decision we found ourselves split 2-2.

2 voted for the braised pork with fennel gratin— and honestly, it was a close 2nd in my book, too. The pork was so tender that it had a succulent, creamy flavor and the fennel was soft and appeared braised along with the pork.

2, including myself, voted for the Duck Confit— it was fall of the bone tender and the sweet, plump cherries were a nice accompaniment. 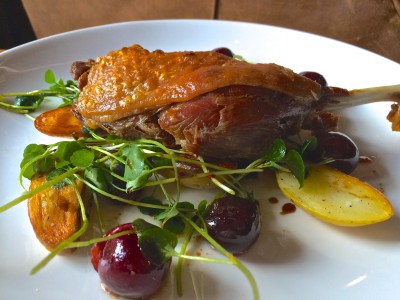 ANY MISSES?
While nicely presented, the ham-stuffed calamari was the table’s least favorite. The texture was a bit rubbery, the stuffing consisted of too many bread crumbs and the ham masked the flavor of the calamari.

Also, the reservation system leaves a lot to be desired. The Alley Light isn’t on Open Table, so guests must call or email the restaurant with reservation requests. That wouldn’t be so bad except the restaurant is only open in the evenings (5 pm – 12 am), leaving you a small window to call and actually talk to someone.

I chose to email my reservation request, and after waiting to hear back for 3 days to no avail, I only heard back after I sent a 2nd follow-up email. Not cool. Also, as I was arriving, an older couple discovered that they didn’t actually have the reservations they thought they did. They had called and left a voicemail with a reservation request and, not having heard back from the restaurant, they assumed they were all set. Wrong. They were unceremoniously shown out… and were very unhappy, disappointed and embarrassed about it. I felt terrible for them.

THE FINAL VERDICT:
The Alley Light deserves a lot of praise for their creative and well-prepared dishes, their handcrafted cocktails and their hip and stylish space. If I lived in Charlottesville, I’d definitely frequent the restaurant for date nights, special occasions or big nights out with the friends.

They need to get their reservation hiccups worked out, but once they do, I think this restaurant will deserve 5 stars. Until then, I give it 4 stars out of 5.