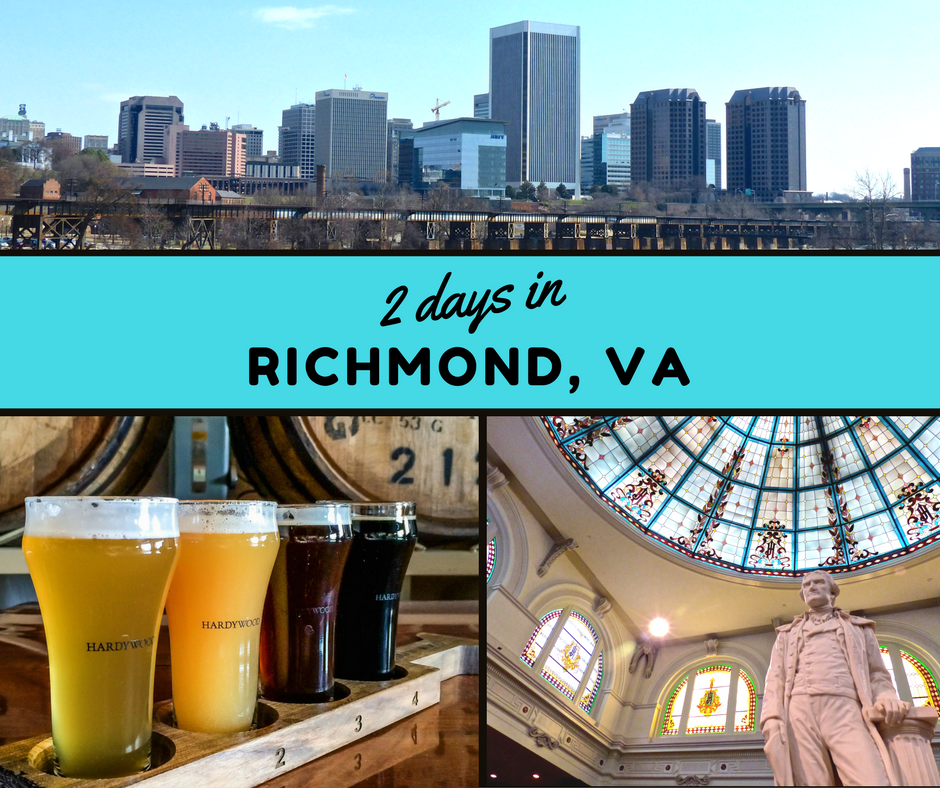 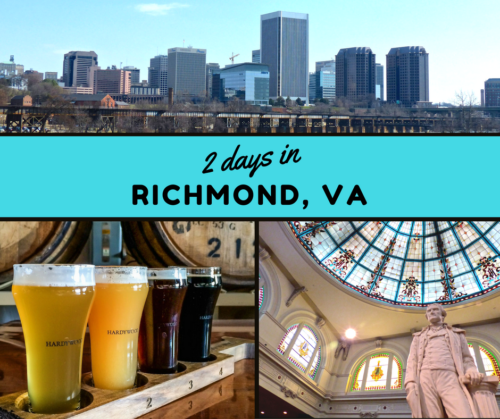 “While you weren’t looking, Richmond got cool.” This statement from Frommers as it named Richmond one of its top places to visit to 2014 has recently kicked off a flurry of national recognition for Virginia’s capitol city that to many is long overdue.

Indeed, Richmond offers visitors much more than just a rich history dating back to before the American Revolution. Today’s Richmond is better defined by a hip, Portland-esque vibe that celebrates all things independent, hand-crafted and local.

Craft breweries, artisan bakeries, art galleries, coffee houses and inspired farm-to-fork eateries are opening at every turn, revitalizing some of the once-rough parts of the city.

Richmond’s outdoor scene is booming as it celebrates its status as the only U.S. city with Class IV rapids within the city limits.

Richmonders themselves are embracing the hip vibe with pride, and many people who once left are moving back to continue the growth and revitalization of the city.

Now for the logistics… while the central train station and Richmond’s compact downtown area makes it very tempting to travel to Richmond by train, a car really is essential in enjoying the weekend and getting around easily. And despite all of the revitalization that the city has gone through, Richmond still has a few rough edges. So, for that reason, I suggest traveling with a companion and, unless otherwise stated, I recommend driving between locations.

Are you ready to discover the hip side to Richmond in just 2 days? Off we go!

1.) Breakfast with a view at Church Hill
Begin your tour of Richmond in one of the city’s most historic neighborhoods, Church Hill. Steps away from the church where Patrick Henry in 1775 famously said “Give me liberty, or give me death…,” Church Hill is a neighborhood that is fast becoming known for its thriving culinary scene.

For breakfast, head to Sub Rosa Bakery (620 N 25th St., 804.788.7672, $), which makes unique varieties of breads and pastries in a wood-fired oven with flour that’s ground on-site. Grab some pastries — TIP: Try the almond croissant — and a cup of locally-roasted Lamplighter Coffee, and head to the nearby Libby Hill Park to eat your breakfast with a view of downtown Richmond. 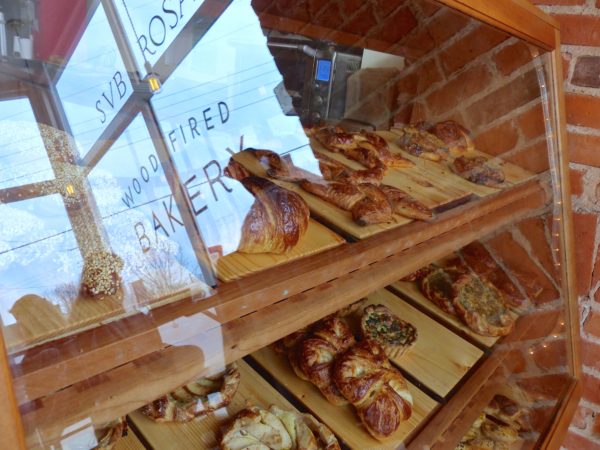 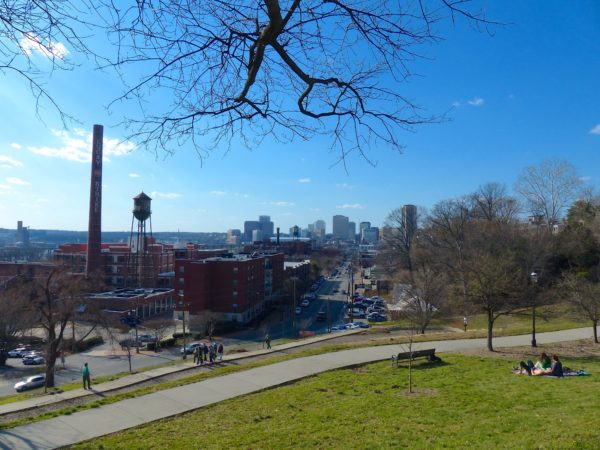 The view from Libby Hill Park

2.) Art-spotting at the Virginia Museum of Fine Arts (200 N. Boulevard, 804.340.1400)
After breakfast, head across town for your daily dose of culture at the Virginia Museum of Fine Arts. Home to an impressive collection of over 33,000 works of art from all over the world, the VMFA features a mix of both classical and modern art (ranging from ancient Egyptian statues to Fabergé eggs to a Warhol piece featuring Elvis.) And the best part? Admission to the museum is free (minus some select temporary exhibits.) 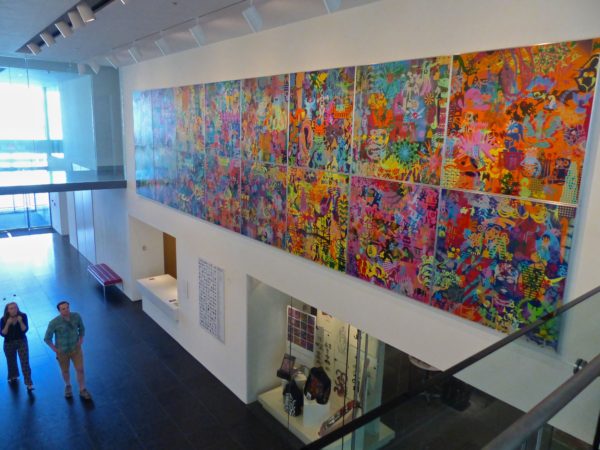 Inside the Virginia Museum of Fine Arts

3.) Lunch and shopping in Carytown
From the VMFA, it’s an easy, half-mile stroll down Boulevard to Carytown— my favorite shopping area in Richmond.

Start by refueling at the popular Can Can Brasserie (3120 W. Cary St., 804-358-7274, $$), featuring French-bistro fare and prime people-watching, before stopping in a few of Carytown’s 300 storefronts. Carytown’s known for having eclectic and independently-owned boutiques such as Clementine (a hip consignment shop), Belmont Butchery (an artisanal farm-to-table charcuterie grocer) and Chop Suey Books (a well-curated store of mostly-used books that could easily entertain bibliophiles for hours.)

Also notable, is the historic Byrd Theater, known for $2 movies and named the one thing you should do in Virginia by the Huffington Post. 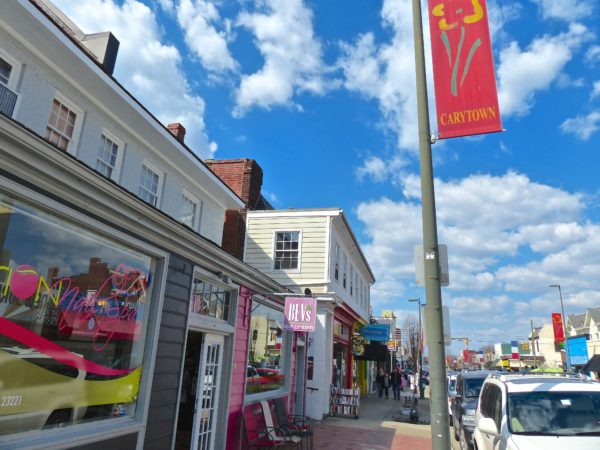 A view of Carytown 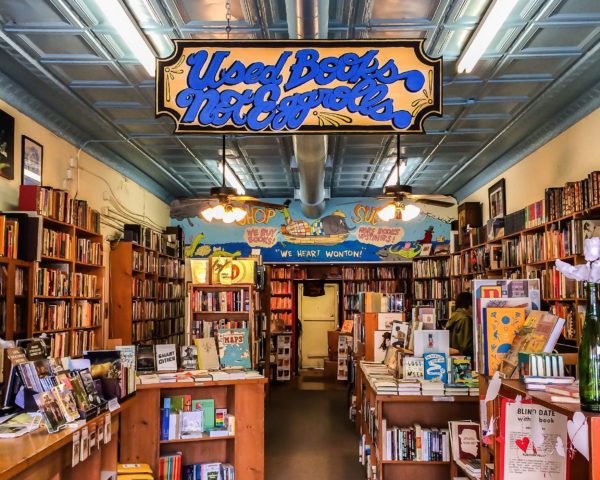 Forget the overly sweet ciders you may have tried before. Blue Bee creates a number of ciders with depth and vastly different flavor profiles. Some standouts from a $7 tasting of 5 ciders include the Charred Ordinary — an earthy and tart sparkler, and Harvest Ration — a delightfully warming and sweet still cider that’s mixed with Catoctin Creek brandy from Loudoun County, Virginia. 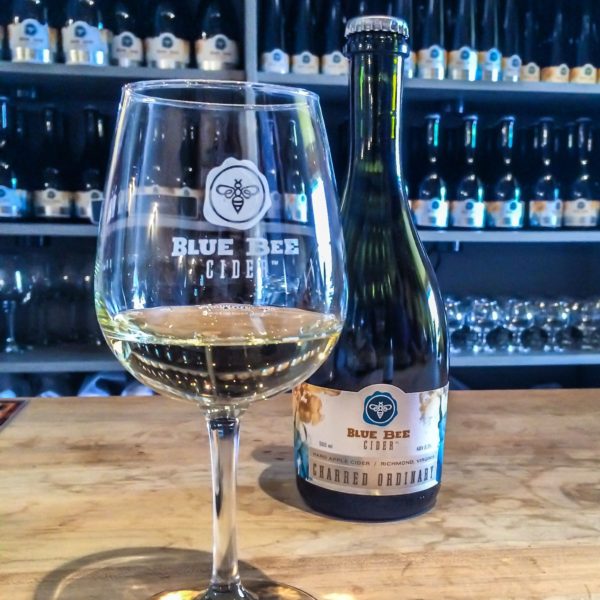 TIP: If you’re up for it after Blue Bee, walk to nearby Legend Brewing Company (the oldest brewery in Virginia) for a sampler and some of the best views of downtown Richmond. 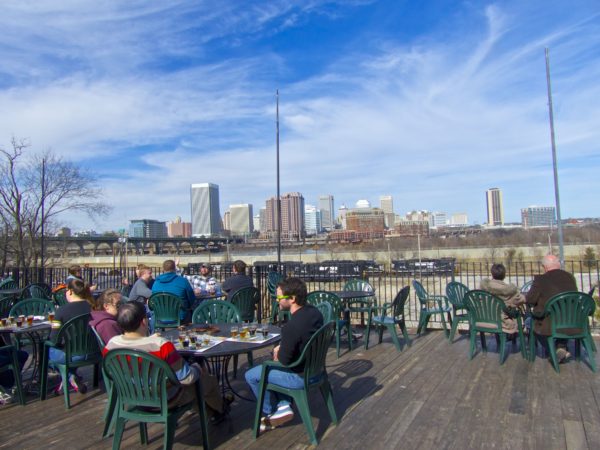 The view from the patio at Legend Brewing Company

The Jefferson Hotel is Richmond’s most unabashedly luxurious property. Open since 1895, this gorgeously elaborate hotel has seen a lot in its 100+ year old history… It’s played host to presidents and celebrities (including Elvis!), has been featured in several movies and alligators used to live in marble pools in the hotel lobby! But more than all that, the hotel aims to please and guests who can afford it (spacious, well appointed rooms run upwards of $400/ night) are in for a treat. 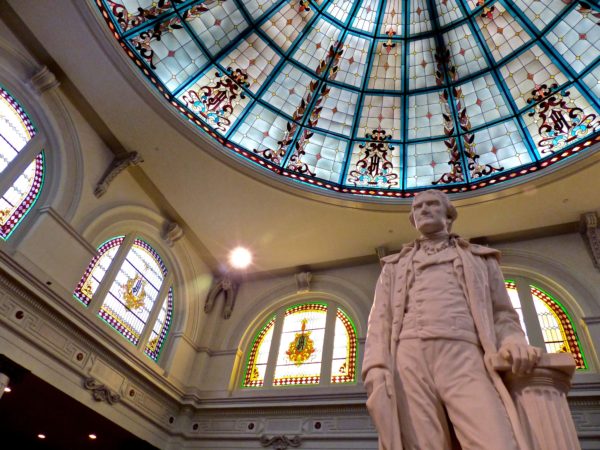 A couple blocks east of the Jefferson is the Linden Row Inn.  It’s also a historic property dating back to the 1800s, and there’s a lovely outside seating area that’s reminiscent of a courtyard you’d see in the French Quarter. Other than location, the big draw for the Linden Row Inn is the price. Clean, generously-sized rooms start at just around $100. However, with the low prices comes service that’s a tad lacking, and the decor in some of the older rooms can come off a bit dated. But overall, the Linden Row Inn is a solid “moderate” accommodation option. 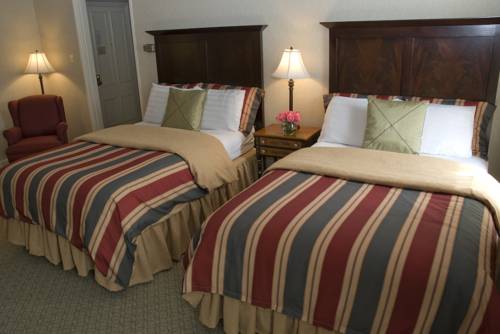 6.) Dinner at a farm-to-table hot spot
If you hadn’t heard, Richmond’s food scene is booming. Check it out for yourself with dinner at one of Richmond’s hottest restaurants.

The Roosevelt (623 N. 25th St., 804.658.1935, $$)
At the Roosevelt, chef and co-owner Lee Gregory (a James Beard nominee) has created a menu of reimagined southern-inspired dishes, that pair well with the restaurant’s robust menu of creative craft cocktails, local brews or a glass of Virginia wine. The 2011 opening of the Roosevelt restaurant revitalized Church Hill, leading to countless other new neighborhood restaurants that have emerged with resounding success. Including… 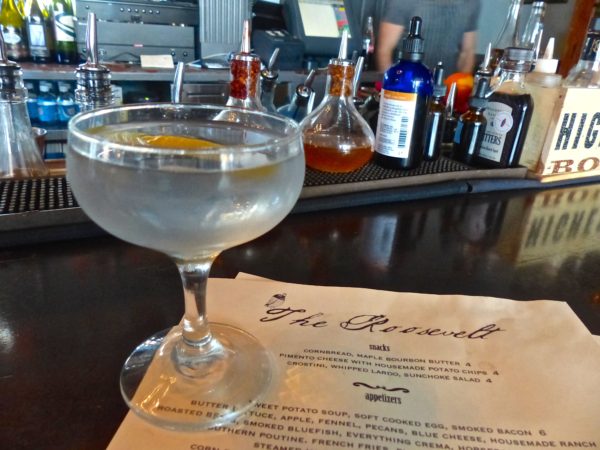 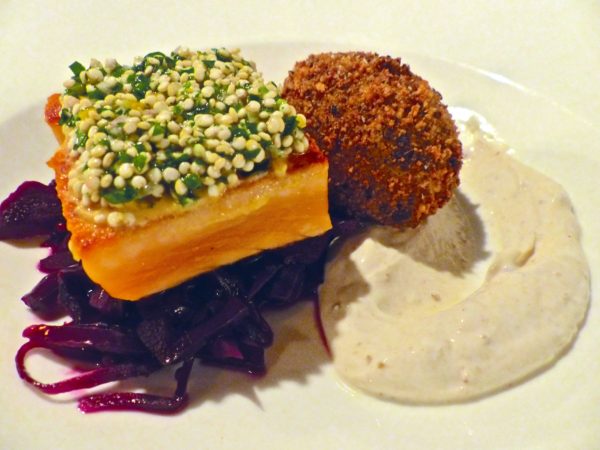 Pasture (416 E. Grace St., 804.780.0416, $$)
Chef Jason Alley’s Pasture has really, really good Pimento cheese. In a city that has enough pimento cheese to feed a small army, Pasture’s officially the big cheese. The creamy, tangy spread served with ritz crackers ($5) is a standout on Pasture’s menu of Southern small plates, but everything from the crispy pork ribs ($11) to the candy bar dessert succeeds on all levels. 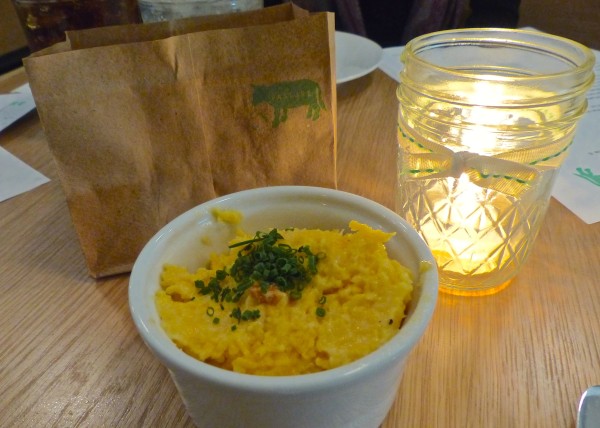 Heritage (1627 W. Main St., 804.353.4060, $$)
Chef Joe Sparatta, his wife Emilia Sparatta, and her brother Mattias Hägglund have come together to create Heritage, a hip foodie spot in Richmond’s Fan district. Hägglund’s popular cocktails are a standout (evident from the always hopping bar area), and the charcuterie plate is a delicious work of art with inventive twists on charcuterie classics, like ranch-cured lomo and kimchi bresaola ($10). 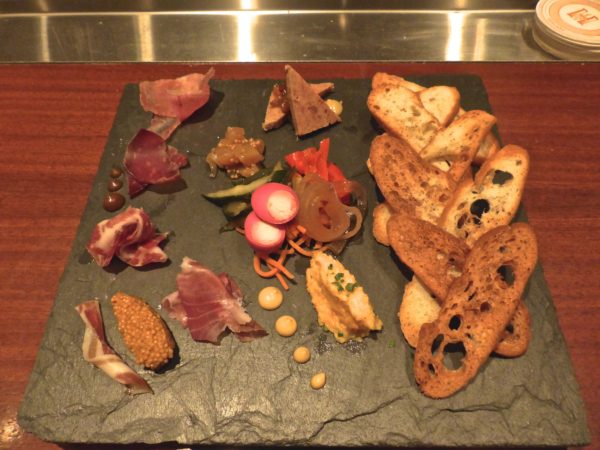 1.) Breakfast at the Jefferson
Whether you are staying at the Jefferson or not, sneak a peek at Richmond’s fanciest hotel by having breakfast at TJ’s. Here you’ll find unique spins on traditional Southern breakfast dishes, like Chicken and Waffles ($14) served with local honey & Tabasco compound butter or the “Low Country Bene” ($16) a spin on a benedict with pulled pork and a cheddar bacon scone for a twist. 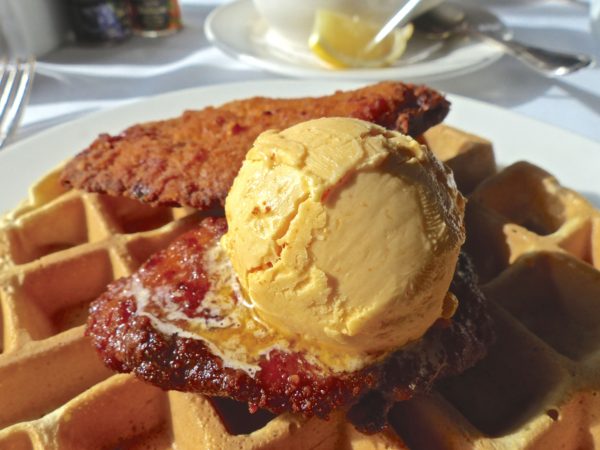 The Chicken and Waffles dish from TJ’s.

2.) Visit the Virginia War Memorial (621 S. Belvidere St., 804.786.2060)
The Virginia War Memorial is a moving memorial honoring Virginians who served from World War II to today. The memorial’s architecture — simply made with stone and glass — and the prime view overlooking the James River and Richmond’s skyline, make it a very special tribute to Virginia’s veterans and fallen heroes that’s worth at least a quick stop. 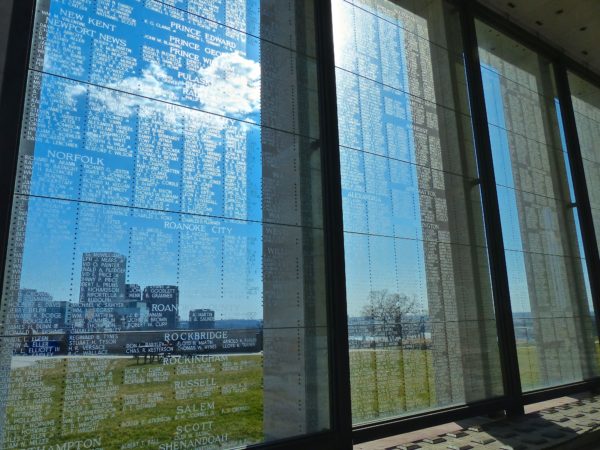 Part of the Virginia War Memorial

3.) Don your sneakers for a stroll on Belle Isle
Below the Virginia War Memorial is a walkway along a suspended bridge that takes you to Belle Isle, a hub of outdoor activities within eyeshot of downtown Richmond. Easily accessible by a suspended pedestrian bridge (of which crossing is a fun experience in itself) the 54-acre island is a city park full of hiking and biking trails, a fishing pond and countless flat river rocks that are a popular with locals for picnicking or sunbathing. 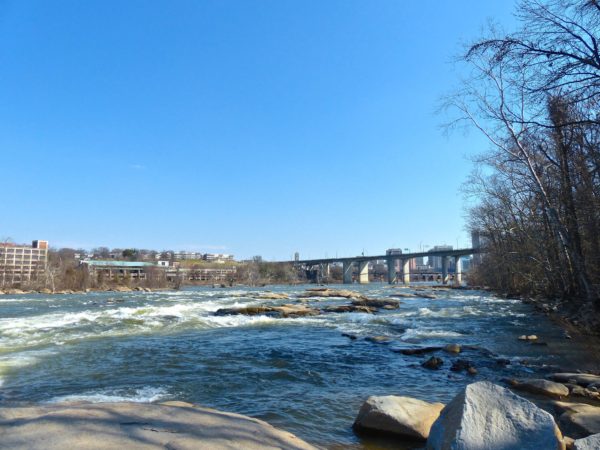 The view of the James River from Belle Isle

4.) Hardywood Park Craft Brewery (2408 Ownby Ln., 804.420.2420)
As far as brewery visits go, Hardywood Park has a lot to offer. Its location in an industrial park allows lots of room for visitors… and it needs it. Hardywood is perhaps Richmond’s most well-known and acclaimed brewery, which is saying something in this beer-friendly town. The atmosphere is industrial-chic, with lots of reclaimed wood accents. The European and American-inspired beers are served up in 4 oz tastes, half-glasses, glasses, bottles or growlers. Try a sampler ($12 for 4-4 oz. tastes) and be sure to include the Great Return IPA as one of your tastes. 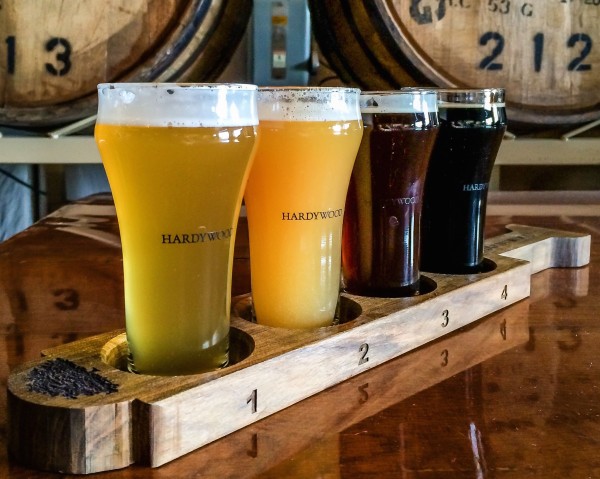 The tasting at Hardywood Park

5.) Get your caffeine fix at Lamplighter Roasting Company (116 S. Addison St., 804.728.2292, $)
Lamplighter Roasting Company is a hip place to get a darn good cup of joe. The coffee roasting company first opened in 2009, and has since opened 3 locations in Richmond. The Addison Street location has a large outdoor patio area, which is is perfect for enjoying a cappuccino and one of the fresh, healthy and reasonably priced sandwiches or salads (including a ton of vegan and vegetarian options), which will fuel you as you say “goodbye” to Richmond and head home. 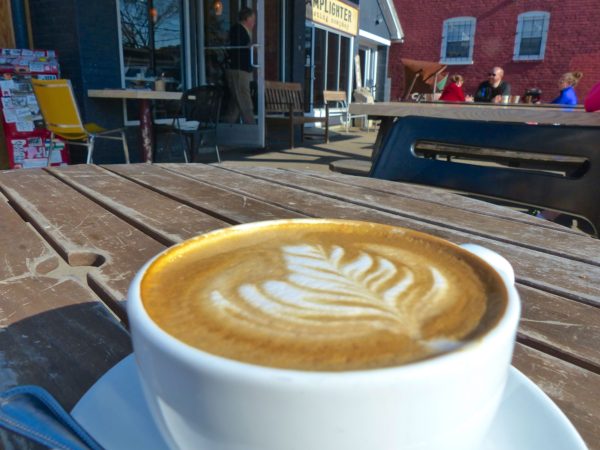 An artful cappuccino on the patio at Lamplighter Roasting Company 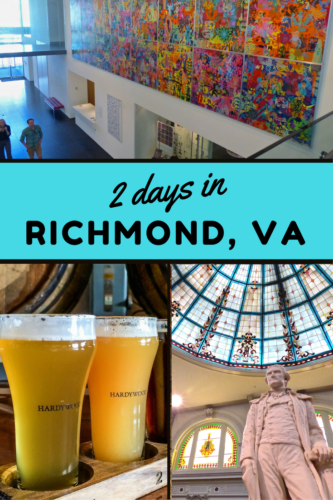 **DISCLAIMER: Most of my meals, accommodations and activities for this trip were provided by Visit Richmond. I worked closely with my contacts there to customize an itinerary that best fit my travel perspective and all opinions are my own.**