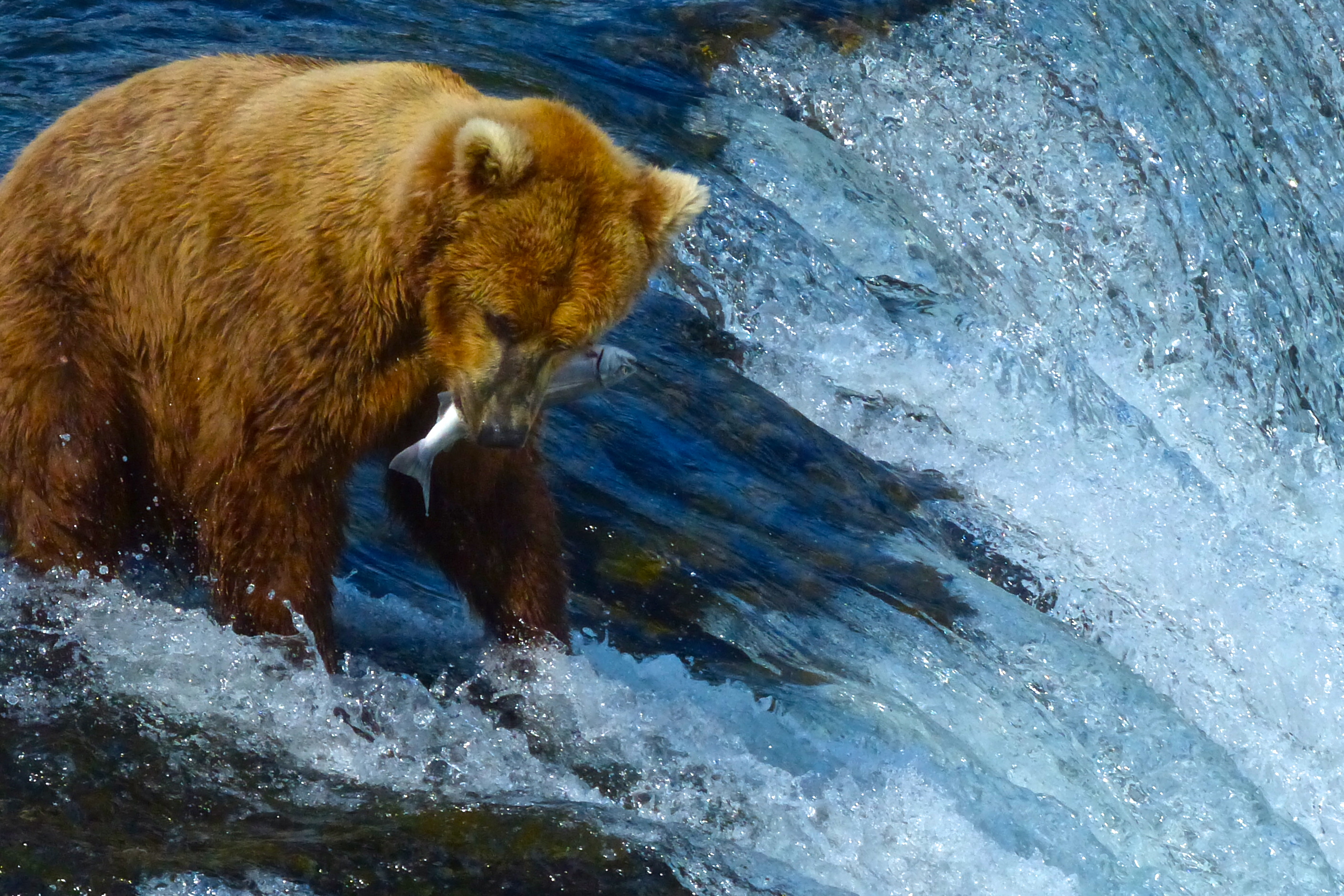 Every July, the largest sockeye salmon migration in the entire world occurs on the Brooks River in Alaska’s Katmai National Park and Preserve. The guarantee of a bountiful food source draws many of the park’s 2,300 brown bears– which are like grizzlies, but 100-150 pounds heavier!– and around 10,000 tourists annually, eager to observe and photograph this epic occurrence on Brooks Falls. 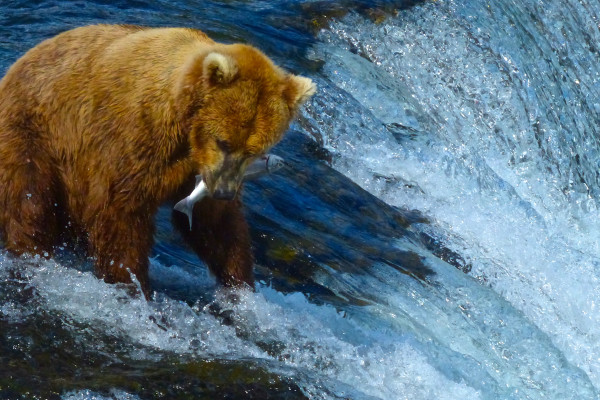 Thanks to my Facebook Fans for picking their favorite bear catching salmon shot!

Brooks Camp is situated 1.2 miles from the falls, on the banks of the Naknek Lake, the largest lake within a National Park. In my opinion, it must also be the lake with the most number of bears swimming in it… because bears were constantly swimming and walking along the lake’s shores.. and startling some people who dared to take a dip! 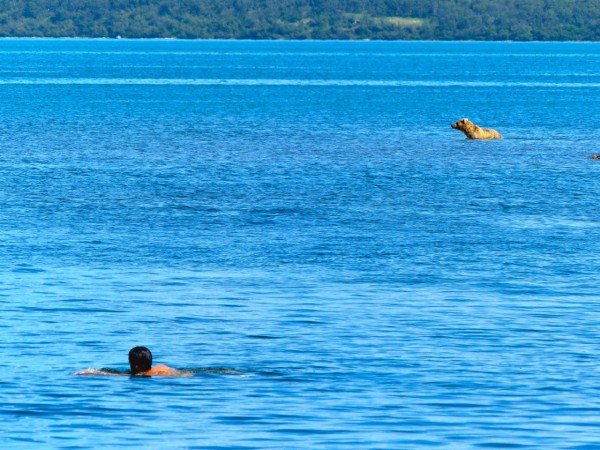 Hey! There’s a bear in the lake!

The only way to arrive to see this phenomenon is by sea plane, which keeps the daily visitors down to a really reasonable number. I, personally, was terrified by the thought of flying on a sea plane… and with good reason. Right before we took off from King Salmon, the plane before us had crashed into a boat and overturned! Mom looked at me and matter-of-factly said, “We’re going.” So, that was it. Fear or not, to the skies I went. 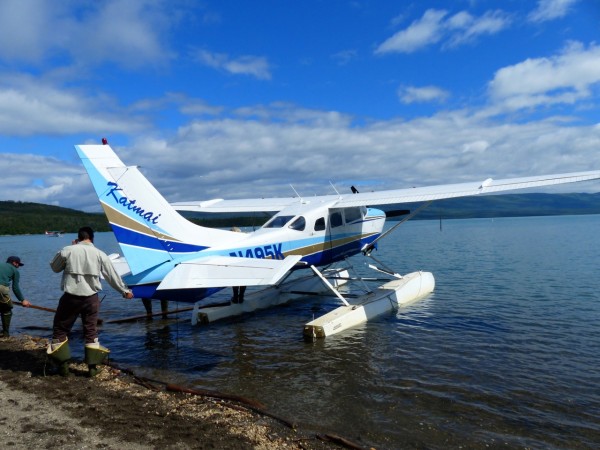 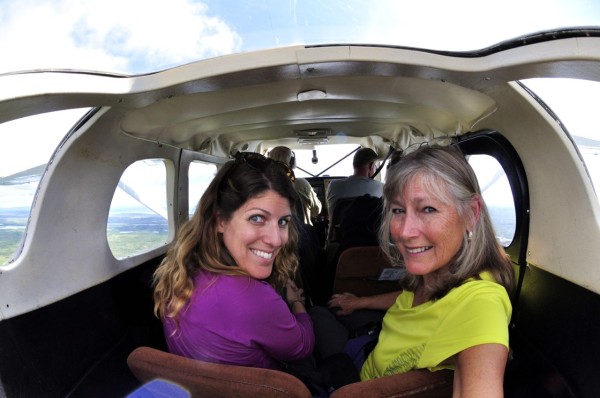 I may put on a good posing face… 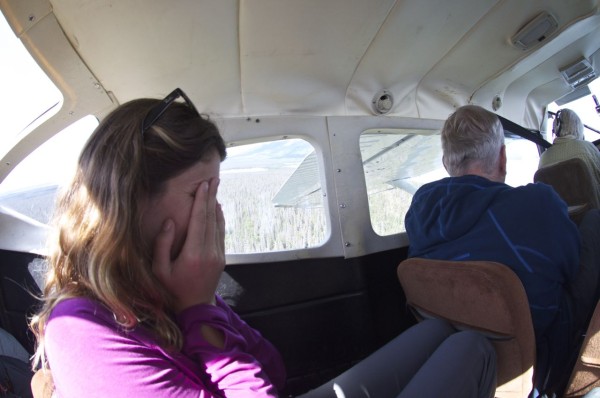 …but Mom captured my true feelings when I wasn’t looking!

Brooks Camp is so remote and spectacular that many people opt to stay in one of the two lodging options available: a campground run by the National Park Service, and Brooks Lodge— an independently owned grouping of rustic cabins with 2 bunk beds. These cabins aren’t cheap (they run around $650/ night) and book up over 18 months in advance for the peak July visiting dates, but they provide a little comfort in this very simple place. 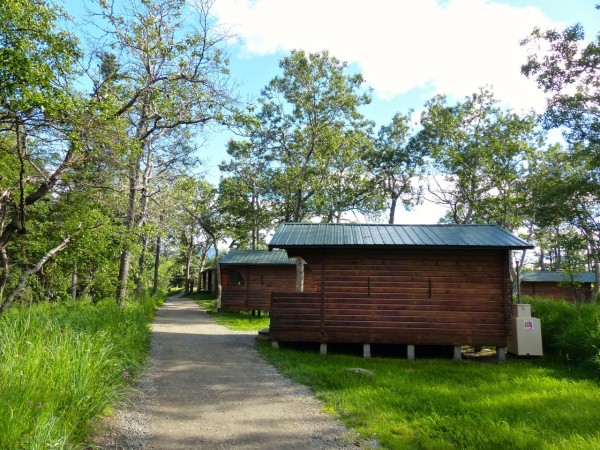 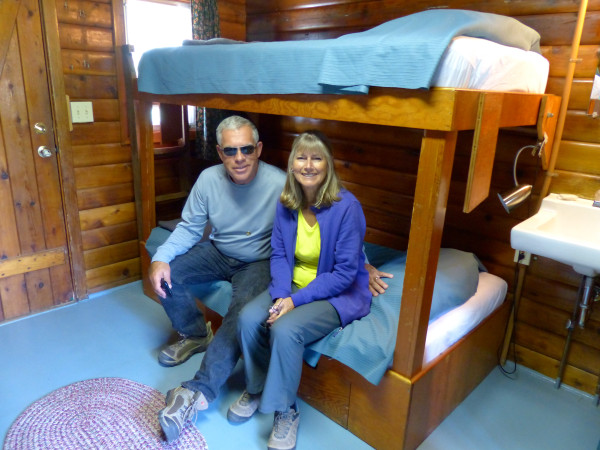 Our cabin. Guess who got the top bunk? THIS gal!

There are some shared facilities, like a restaurant serving buffet-style meals and alcoholic beverages in the evening, but it’s pretty bare bones. People don’t come for the lodging… they come for the bears!

At the falls, the scene is one of constant activity. The bears (often numbering over 10 at a time) vie for prime placement in and on the falls. The big males sit and stake out their position, often staying in the same spot for hours, fishing and eating to their heart’s content. 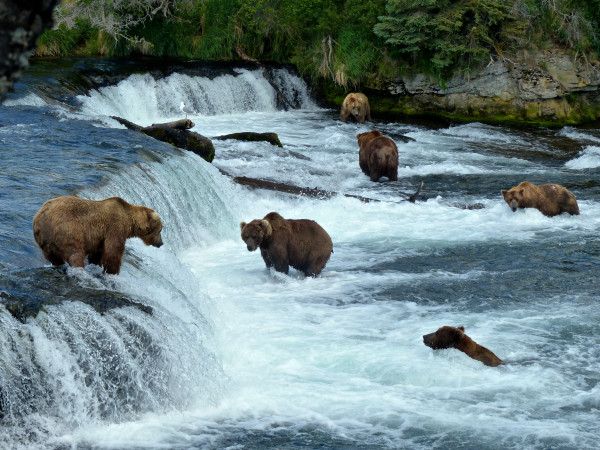 I could watch this view for hours… and I did!

Wandering around the outskirts, the younger bears and females loiter, waiting for their opportunity to sneak in amongst the big boys. Occasssionally, they’ll try and inch forward, only to be shoo’d away by an alpha male’s angry roar. 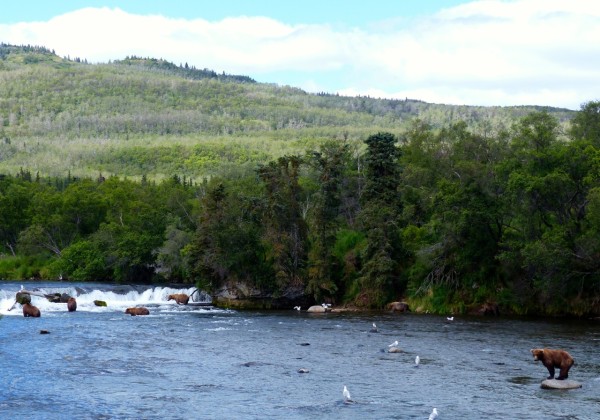 An odd bear out

During our visit we also saw two sets of mama bears and cubs. First, a mother bear had her hands full with a trio of spring cubs, which are easy bait for the territorial males. She cautiously fished, all the while watching her cubs who waited on the shore, watching her. 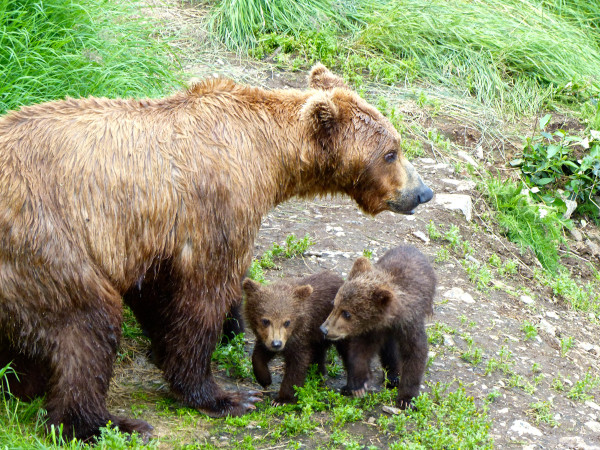 Mama bear with two of her cubs

Another mom with a trio of yearlings is able to venture a little farther out. The biggest cub was brave and tried to help mom fish and protect the group. But it was the runt who won over our hearts with his cautiously skittish demeanor. 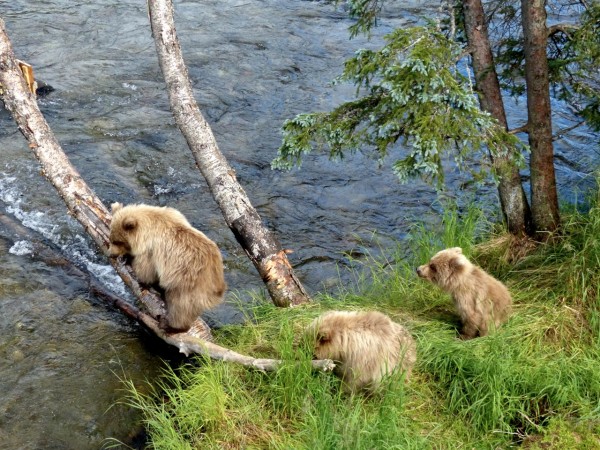 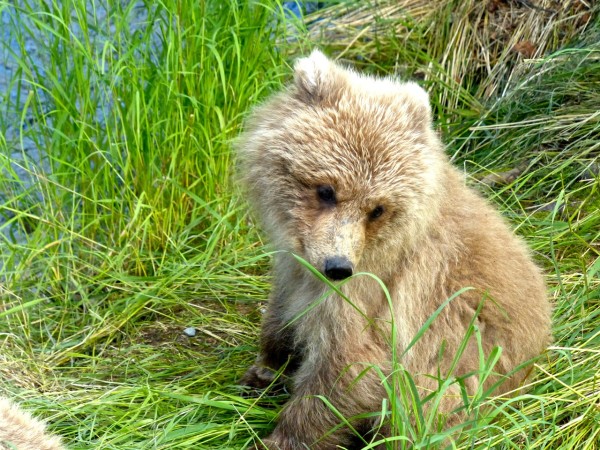 I mean… just look at this face!

Watching the bears for hours on end, personality patterns begin to emerge. Some are expert hunters, catching fish after fish with effortless ease. 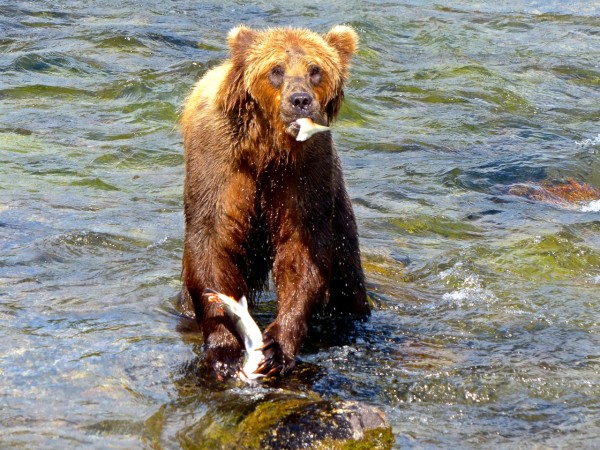 I love this shot. He’s looking right at me!

Other bears are thieves, using their strength to intimidate other bears to abandon their hard-earned salmon.

Finally, there are those like the bear affectionately named Otis, who sits for hours, quietly and alone, somehow managing to peacefully catch fish un-disturbed. 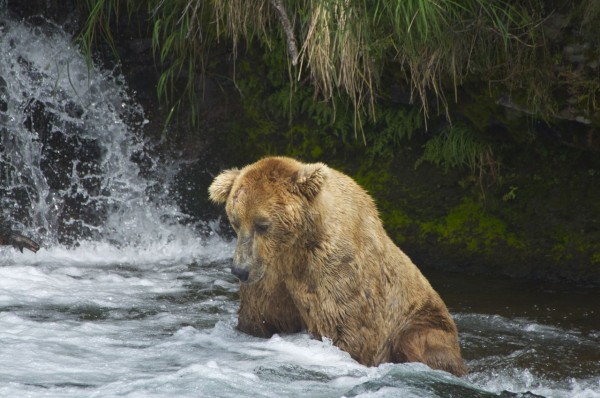 Then, there are the birds. The seagulls are greedy scavengers who bravely approach the feeding bears to swipe a piece before flying away. 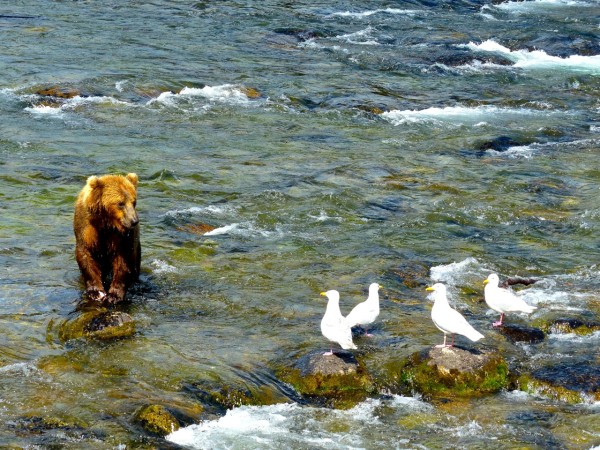 But when the eagles decide to descend, the seagulls scatter in frenzied fear and it’s quite the sight! 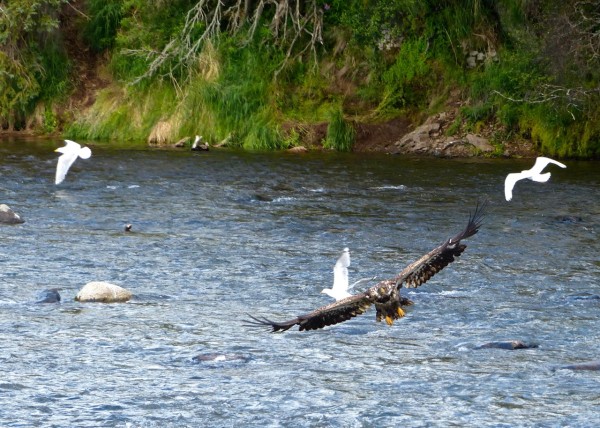 This is a juvenile eagle, but fully grown bald eagles made many appearances

Then, there are the people. We watch in near silence a mere 15-feet above the scene, and we are simply enthralled with these bears. We begin to find our favorites and get invested in the drama of the falls. Will the mother of the 3 spring cubs finally catch a fish? (Yes!) Will the adorable runt yearling find the courage to join his siblings in the water? (Not this time.) Will Otis ever move from his favorite spot? (Nope! He’s happy just where he is.) 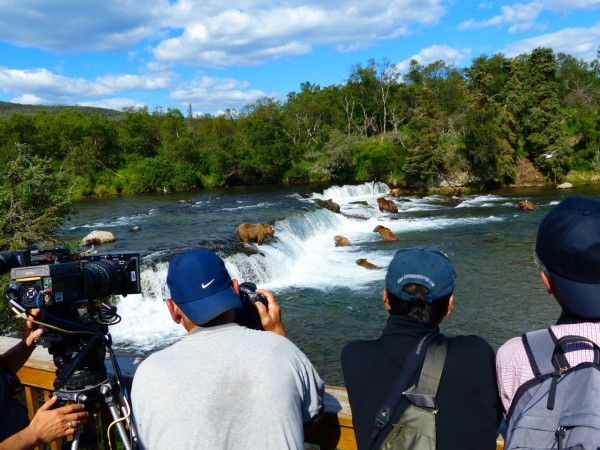 Photographers vying for a spot. During our stay, Disney was even there filming for their new ‘Bears‘ documentary!

As a salmon jumps and lands into a bear’s open jaws, the once silent crowd erupts in cheers. It’s a cheer for the bear, a cheer for themselves catching the moment on camera, or perhaps a little bit of both. 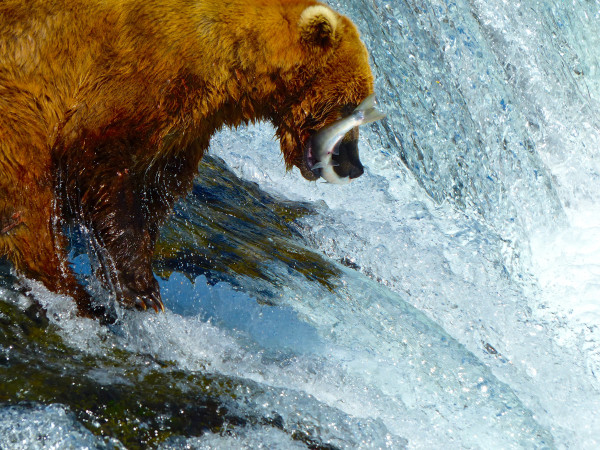 I couldn’t resist adding another bear-catching-salmon shot. I waited hours to catch it!

Non-feeding bear behavior is on display all around Brooks Camp as well. 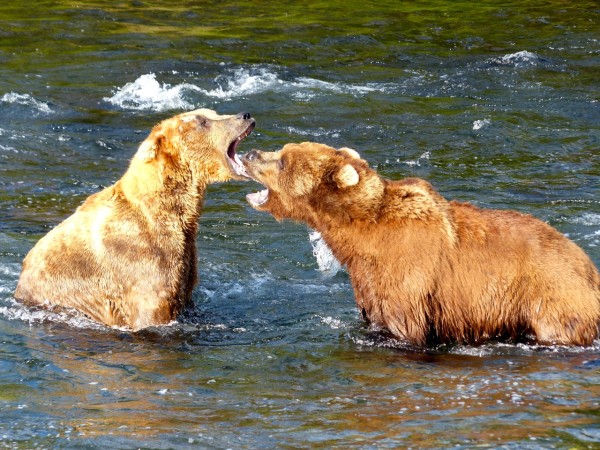 Bear Behavior #2: Mating. (I saw my fair share of bears gettin’ it on… yikes.) 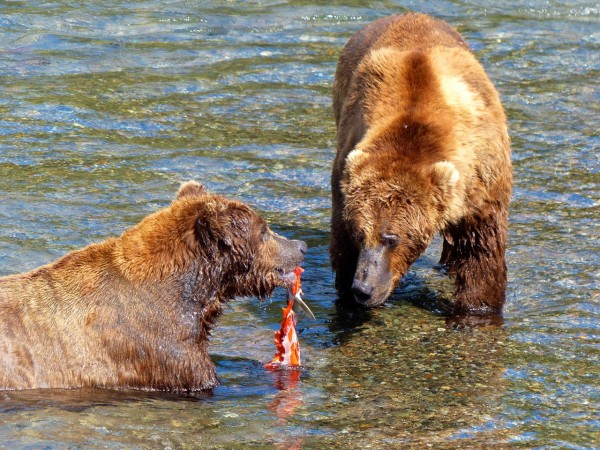 Bear Behavior #3: Even bears that shared! With this pair (the “Share Bears”), the bear on the left would catch, and the bear on the right would closely approach, lay down and put his face right next to the fish. I thought that he would get shoo’d away, but the bigger bear shared a little morsel every time!

Oddly, humans and bears share the land here in what the NPS calls an “uneasy coexistence.” Bears here are somehow tolerant of humans, but it’s on us to keep our distance. In the area immediately around the falls, a boardwalk suspended 15-feet above the ground provides protection. 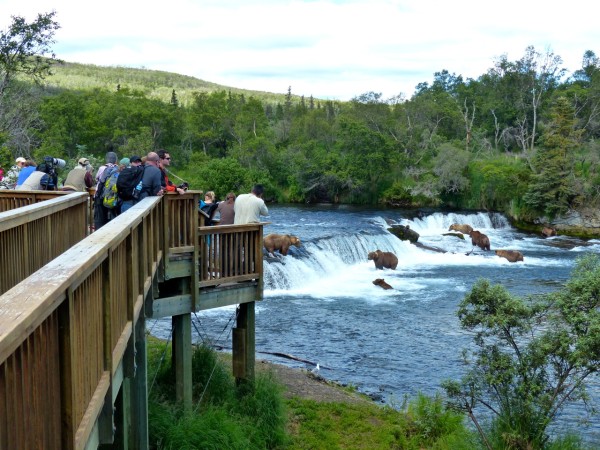 However, for the nearly mile-long walk to the boardwalk, you’re walking on a narrow unprotected trail, often alone and in a very densely wooded area. The fact that bear trails criss-cross the entire journey is not comforting to skittish hikers, and you’ll often hear hikers talking loudly or singing to try to announce their presence. 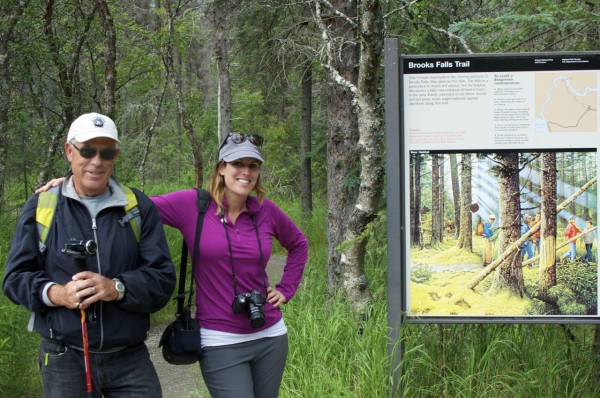 Dad and I on the way to the falls 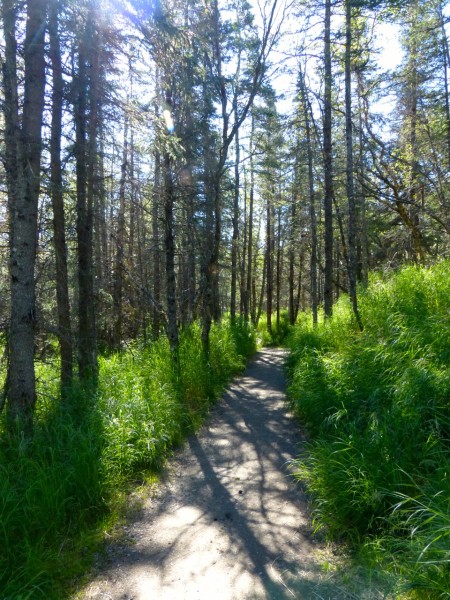 Yep… not protected from bears. Scary!

During the mandatory “Bear Etiquette” training class, rangers recommended we keep a 50-yard safe distance at all times. Along the path to the boardwalk it’s not unusual to be delayed by a “Bear Jam” — AKA a bear walking on or sleeping near the trail. During peak hours, Park Rangers are set up at key spots, viewing for bears and advising visitors about the latest Bear Jam status.

However, it’s kind of hard to keep your distance when bears are literally everywhere you look.

Our first night, we were taking a photo outside the dining hall when two huge bears came barreling past us, apparently playing a rowdy game of tag. Before we had a chance to lift our jaws off the ground, they were running past us again the other direction. That first night, it was pretty hilarious watching the bears continue to run around the building throughout the evening– each time, people immediately left their beer or game of cards to rush to the nearest window to watch the show.

Moments before the bears galloped by. 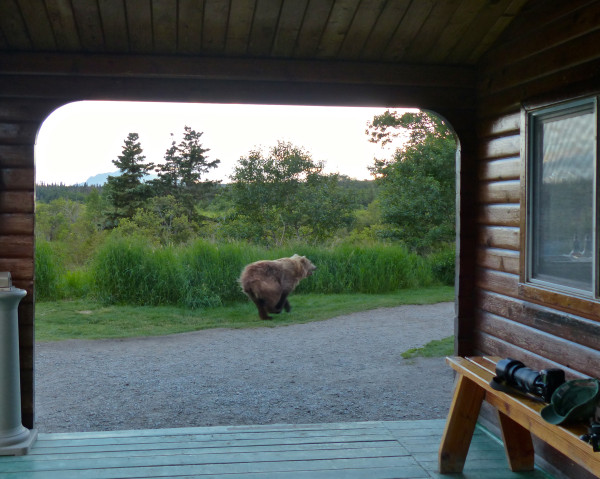 A quick shot of one of them… running full speed!

Brooks Camp is just a really special place. I must have watched bears for hours upon hours and was captivated from the first moment to the last. Before this trip, I had never seen a bear in the wild, and now the tally is more than I could count! The two days I spent there was worth every penny, and now I’m left asking… when are we going back?! 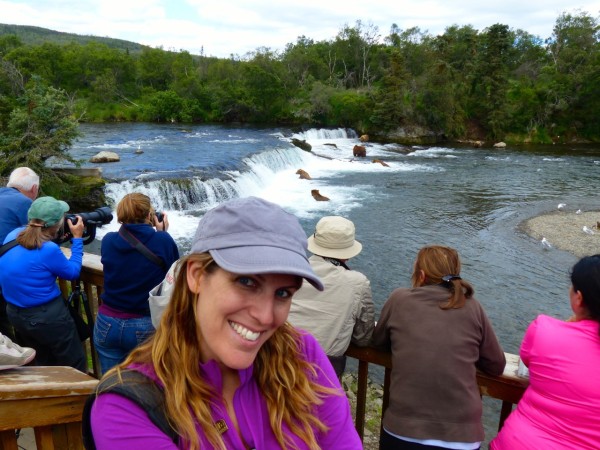 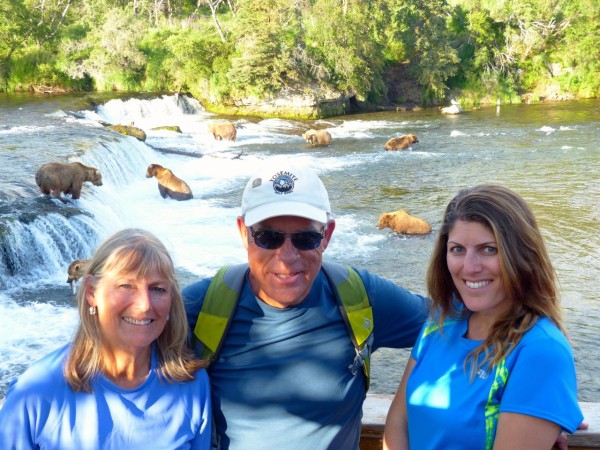