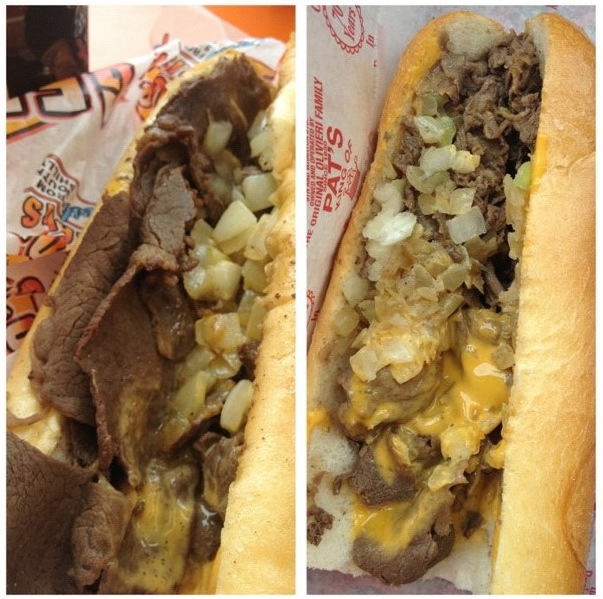 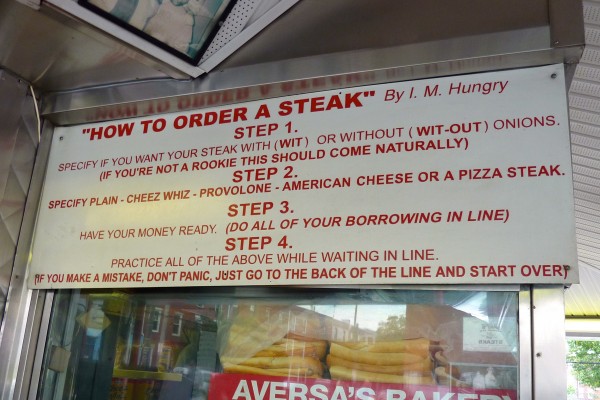 I’ve been talking about doing a Philadelphia Cheesesteak Taste Test for years. Living right outside of Washington, DC (a mere 2 1/2 hours away) it should have been an easy weekend activity to do. But year after year has gone by, and no Philly cheesesteaks.

As part of October’s Local Travel Month, this weekend I decided to finally cut to the chase, hop in my car and head to Philly to try the two universally known cheesesteak places: Pat’s and Geno’s. With me were my parents, our friends Alan and Linda, and their son Scott. With 6 of us, we were bound to come to a consensus of which eatery was the best. Right?

First up was Geno’s Steaks, self-proclaimed as the “Best Cheesesteak in Philadelphia since 1966.”

Immediately, I was struck by the flashy exterior of the corner storefront and the line that extended far into the middle of the busy intersection. People were everywhere, taking photos and chattering about the best way to order the sandwiches. (The answer to that is a “Wiz Wit”… a cheesesteak with cheese whiz (“Wiz”) and fried onions (“Wit”).) 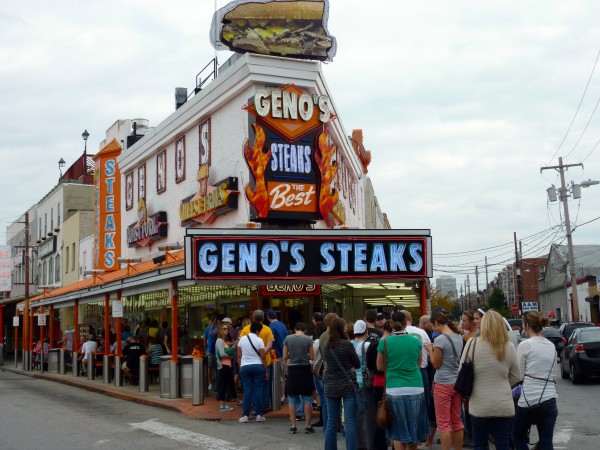 Luckily, the massive line moves fast. I guess with a cash-only register, a small menu and quick cooks behind the counter, there’s not much to slow things down. 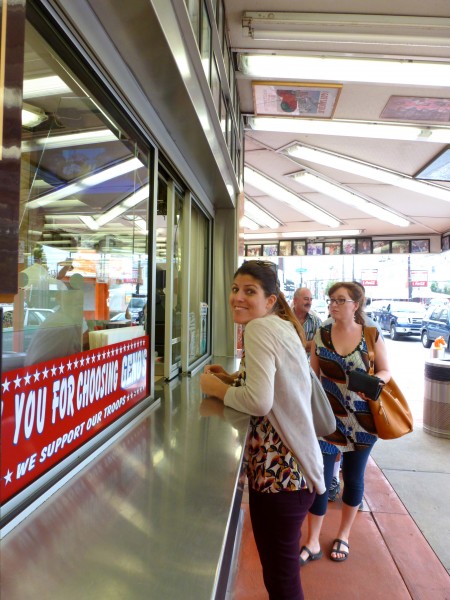 Within mere moments of ordering, I was rewarded with this: 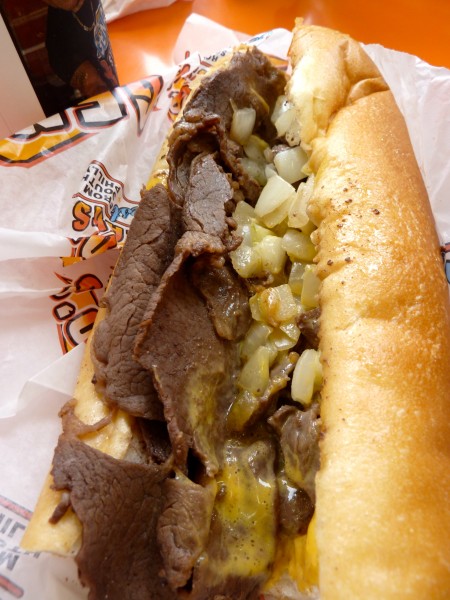 The bread was soft but chewy, kind of like the texture of a pretzel roll. The cheese whiz was tangy and melted completely into a thin sauce that generously coated the inside of the roll, creeping slightly atop the top of the meat and onions. The steak was thinly sliced, tender and flavorful – no chopped steak here!- and topped with perfectly salty fried onions. When I finally took my first bite, I could swear I was in foodie heaven… until I was brought back down to earth by the gentle plopping sound of grease dripping out of my sandwich onto the thin paper below.

With one cheesesteak down, it was time for part 2…

Pat’s King of Steaks (“The Originator and Inventor of the Steak & Cheese Steak Sandwiches” since 1930.)

Staring each other down on opposing street corner’s, the walk between the two establishments is non-existent. Pictures can’t even begin to convey the confusion, excitement and utter chaos that these two places evoke. People are everywhere, partially due to the fact that there’s only a few picnic tables for diners to sit at. Drivers are heckling people who are standing in line in the street (and in the line of traffic), who yell right back. It’s quite the scene.

Also, seeing the close proximity made me realize how this rivalry came to be… and also how incredibly awkward it must be as the competing line cooks pass each other on the way to work. (Which must happen on occasion, right?)

Where Geno’s may draw crowds in with neon signs and a sleek storefront, Pat’s takes a much subtler approach. A modest white facade, flanking nameplates and a single plaque touting that they created the beloved cheesesteak is enough to draw crowd. 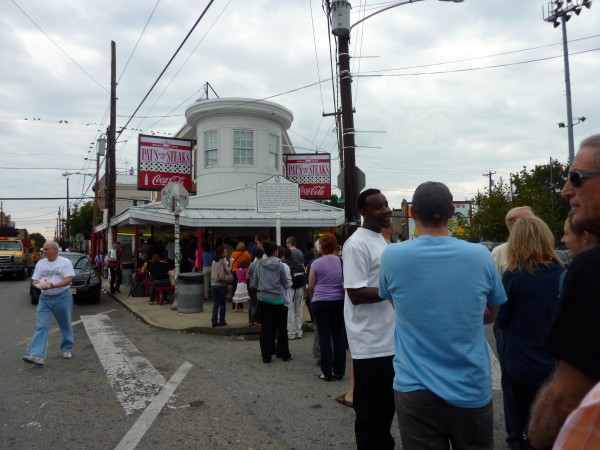 At Pat’s the line moves quickly as well, although I’m convinced that it’s due to the incredibly rude and pushy people behind the counter. Here, you’ll frequently hear shouts of “Jeeeezzz! Come onnnn! Hurry Up! What’s the hold up?!”

Is it all in good fun? Who’s can tell! It sure didn’t feel that way to me. And with things such as this impressive display of Cheese Whiz, it’s enough to throw-off even the most “ready to order” travel blogger out there! 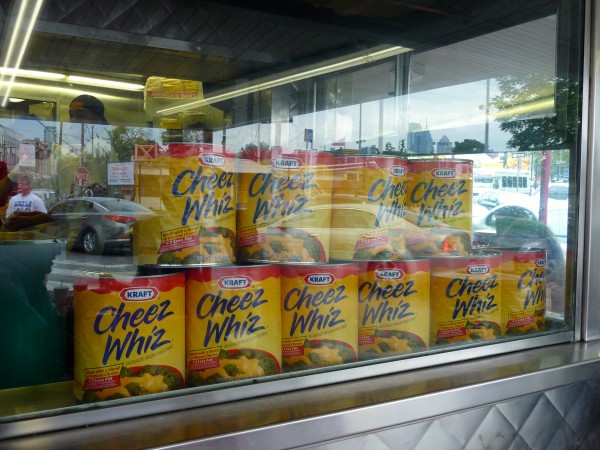 Pat’s cheesesteak was definitely different from Geno’s. The meat was thinner, and chopped up slightly. The cheese whiz was poured over the top of the steak and onions, which created a much prettier photo. The bread was softer, too. 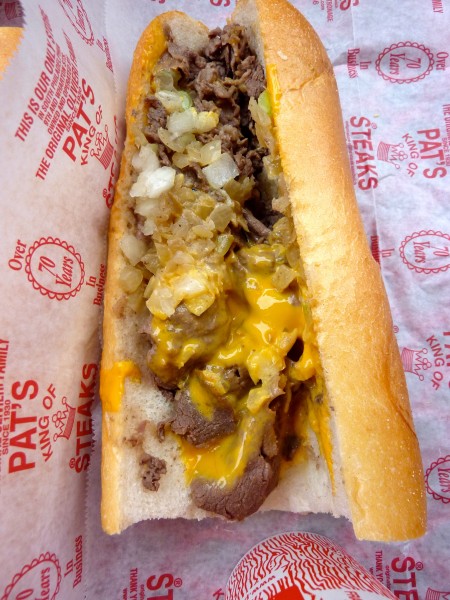 However, for me, there was no contest. Based purely on taste alone, Geno’s was the clear winner. The flavors flat-out tasted better. The onions were more flavorful (Pat’s onions tasted watered down), the meat was better seasoned and the cheese whiz even seemed to have more “zip”… is that even possible?

That said, it wasn’t a clean sweep. Here’s how our final tally broke down:

And, I realize that Pat’s and Geno’s is hardly the only cheesesteak game in Philadelphia. I’ve been inundated with recommendations and pleas for me to try some of the lesser know, but allegedly better places (Pat’s, Tony Luke’s, Chink’s, etc.), for the taste test. All I can say is – a girl can only eat so many cheesesteaks in one day. But, all of your recommendations gives me something to do next time I’m in Philly. 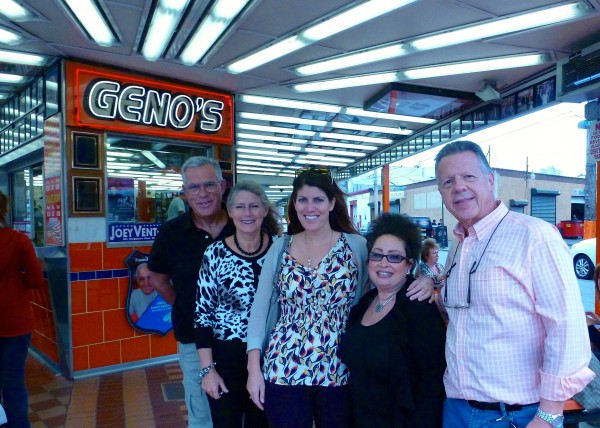