My 28th Birthday… the Disney way!

Posted at 05:09h in Go, My Travels by Christina Ricchiuti-Dubin 1 Comment 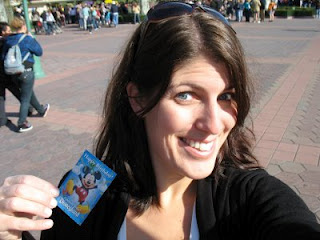 After 4 nights in beautiful Santa Monica, I got up really early on my birthday, Thursday February 12th, to head to Anaheim. With only one day in Disneyland, I wanted to get there as early as possible to see as much as I could with the little time I had.

It’s not an easy trek, but with some research I found that the best way to go was to take a cab to LAX airport, then hop on the Disneyland Express (I kid you not!) to get dropped 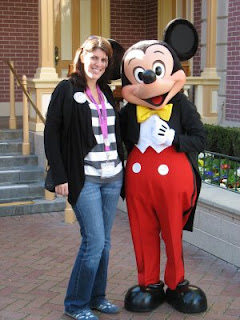 off at my hotel the Grand Californian! So I crawled out of bed at 6 am, got to LAX by 7, hopped on the Express at 7:30 and was in Anaheim faster than you could say Bippity, Boppity, Boo!!

And, lucky me, my room was ready and I could check in right away! Now how ’bout THAT Disney magic! They sent me to my room with balloons, a birthday button, and an autographed picture of the Disney princesses… and who says you have to grow up? 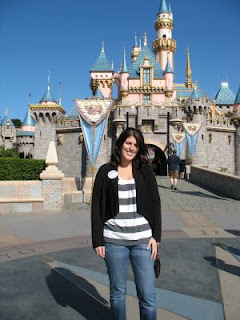 My hotel was very lodge-like, with a lot of Frank Lloyd Wright influence. Beautiful stained glass doors, little dimmer-switched lanterns on the beds. And it was so perfectly located, about 1 minute walking from Downtown Disney, with shops and restaurants galore, and about 5 minutes from the entrance to the actual parks. With only one day and limited time, it was great being so close.

A couple random Disneyland thoughts, since I am a Disney World girl through and through: 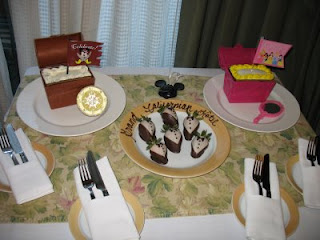 I got an incredible surprise (or 2!) from my very dear friends. A Mickey balloon and Pirate cake from Meagan and a Princess cake and chocolate covered strawberries from my Travel Channel friends. If you could have seen my face when the man with the cart said that those goodies were for me! What a great feeling to have such amazing friends. (And everything was delicious, too!!)

And if that wasn’t enough, I went to a fantastic dinner at Napa Rose, the award winning restaurant at the hotel under the close direction of head Chef Andrew Sutton. I was fortunate to be able to spend the evening under his attentive culinary care at the Chef’s Counter. The smartest move that I made that night was to answer “Sure!” to his question of “You don’t have to order… We could just cook for you if you want… and, do you want the wine accompaniment?” Everything was so good. 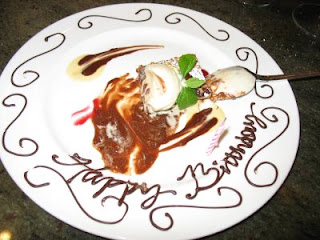 Great company, great food (6 courses, 4 glasses of wine- they just kept coming! And the homemade bread – 4 kinds!- was nothing short of amazing.) The chef, waitress Wendy and the lovely couple who quickly befriended me all offered to sing Happy Birthday, but I didn’t want the extra attention. For me, the night was great the way it was (only I could have used my own personal entourage of boyfriend, friends and parentals to make it truly perfect). But they took it one step further and discounted my entire meal over 50%. What a great ending to a pretty darn awesome birthday.